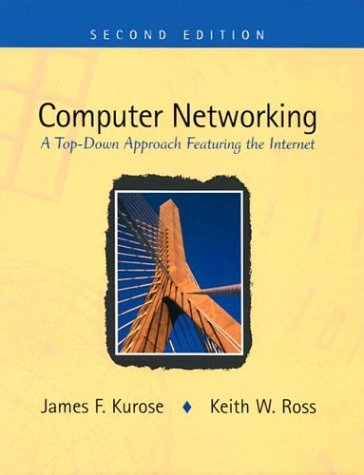 Computer Networking: A Top-Down Approach Featuring the Internet provides a modern, top-down approach to the study of computer networking that begins with applications-level protocols and then works down the protocol stack. An early emphasis is placed on application-layer paradigms and application programming interfaces, allowing readers to get their "hands-dirty" with protocols and networking concepts in the context of applications they use daily. Proceeding through the layered network architecture in a top-down manner allows readers to focus on the network services that are needed and then, in turn, study how these services can be provided. Both the principles and practice of modern computing networking are covered. Networking is much more (and much more interesting) than dry standards specifying message formats and protocol behaviors. Professors Kurose and Ross focus on describing the emerging principles of the field and then illustrate these principles with examples drawn from Internet architecture. The discussion is lively and engaging. This second edition has been updated to reflect the rapid changes in the field of networking over the last few years. The entire text and references have been updated based on changes in the field and feedback from readers of the first edition.

Dr. Kurose is a former Editor-In-Chief of the IEEE Transactions on Communications and of the IEEE/ACM Transactions on Networking. He is active in the program committees for IEEE Informcom, ACM SIGCOMM, and ACM SIGMETRICS. He holds a Ph.D. in Computer Science from Columbia University.

Keith Ross is the Leonard Shustek Chaired Professor in the Computer Science Department at Polytechnic University. He has previously been a professor at both Eurécom Institute in France and the University of Pennsylvania. In 1999, he co-founded the Internet startup Wimba.com.

Dr. Ross has published over 50 papers and written two books. He has served on editorial boards of five major journals, and has served on the program committees of major networking conferences, including IEEE Infocom and ACM SIGCOMM. He has supervised more than 10 Ph.D. theses. His research and teaching interests include multimedia networking, asynchronous learning, Web catching, streaming audio and video, and traffic modeling. He received his Ph.D. from the University of Michigan.