Articoli correlati a In the House of the Hangman: The Agonies of German... 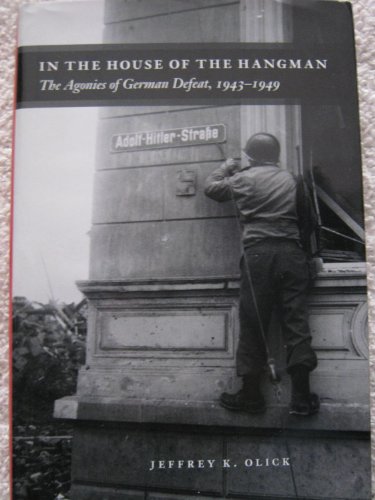 The central question for both the victors and the vanquished of World War II was just how widely the stain of guilt would spread over Germany. Political leaders and intellectuals onboth sides of the conflict debated whether support for National Socialism tainted Germany's entire population and thus discredited the nation's history and culture. The tremendous challenge that Allied officials and German thinkers faced as the war closed, then, was how to limn a postwar German identity that accounted for National Socialism without irrevocably damning the idea and character of Germany as a whole.

In the House of the Hangman chronicles this delicate process, exploring key debates about the Nazi past and German future during the later years of World War II and its aftermath. What did British and American leaders think had given rise to National Socialism, and how did these beliefs shape their intentions for occupation? What rhetorical and symbolic tools did Germans develop for handling the insidious legacy of Nazism? Considering these and other questions, Jeffrey K. Olick explores the processes of accommodation and rejection that Allied plans for a new German state inspired among the German intelligentsia. He also examines heated struggles over the value of Germany's institutional and political heritage. Along the way, he demonstrates how the moral and political vocabulary for coming to terms with National Socialism in Germany has been of enduring significance—as a crucible not only of German identity but also of contemporary thinking about memory and social justice more generally.

Given the current war in Iraq, the issues contested during Germany's abjection and reinvention—how to treat a defeated enemy, how to place episodes within wider historical trajectories, how to distinguish varieties of victimhood—are as urgent today as they were sixty years ago, and In the House of the Hangman offers readers an invaluable historical perspective on these critical questions.

Jeffrey K. Olick is professor of sociology at the University of Virginia.