Articoli correlati a Sources Of Japanese Tradition: 1600 To 2000 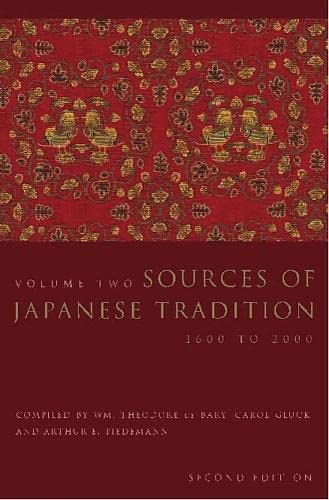 Since it was first published more than forty years ago, Sources of Japanese Tradition, Volume 2, has been considered the authoritative sourcebook for readers and scholars interested in Japan from the eighteenth century to the post-World War II period. Now greatly expanded to include the entire twentieth century, and beginning in 1600, Sources of Japanese Tradition presents writings from modern Japan's most important philosophers, religious figures, writers, and political leaders. The volume also offers extensive introductory essays and commentary to assist in understanding the documents' historical setting and significance. Wonderfully varied in its selections, this eagerly anticipated expanded edition has revised many of the texts from the original edition and added a great many not included or translated before. New additions include documents on the postwar era, the importance of education in the process of modernization, and women's issues.

Beginning with documents from the founding of the Tokugawa shogunate, the collection's essays, manifestos, religious tracts, political documents, and memoirs reflect major Japanese religious, philosophical, social, and political movements. Subjects covered include the spread of neo-Confucian and Buddhist teachings, Japanese poetry and aesthetics, and the Meiji Restoration. Other documents reflect the major political trends and events of the period: the abolition of feudalism, agrarian reform, the emergence of political parties and liberalism, and the Sino-Japanese and Russo-Japanese wars. The collection also includes Western and Japanese impressions of each other via Western religious missions and commercial and cultural exchanges. These selections underscore Japanese and Western apprehension of and fascination with each other.

As Japan entered the twentieth century, new political and social movements-Marxism, anarchism, socialism, feminism, and nationalism-entered the national consciousness. Later readings in the collection look at the buildup to war with the United States, military defeat, and American occupation. Documents from the postwar period echo Japan's struggle with its own history and its development as a capitalist democracy.

Wm. Theodore de Bary (1919–2017) was John Mitchell Mason Professor Emeritus and provost emeritus of Columbia University. His many books include Waiting for the Dawn, Message of the Mind, and Learning for One’s Self, as well as Sources of Japanese Tradition and Sources of Korean Tradition, all published by Columbia University Press.

Carol Gluck is the George Sansom Professor of History at Columbia University. She is the author of Japan's Modern Myths: Ideology in the Late Meiji Period.

Arthur Tiedemann is a member of the Society of Senior Scholars at the Heyman Centre for the Humanities, Columbia University. He is the author of Modern Japan: A Brief History.

1. Sources of Japanese Tradition: 1600 to 2000 (Introduction to Asian Civilizations)

Descrizione libro 2005. Condizione: NEW. 9780231129848 This listing is a new book, a title currently in-print which we order directly and immediately from the publisher. For all enquiries, please contact Herb Tandree Philosophy Books directly - customer service is our primary goal. Codice articolo HTANDREE01137988

6. Sources of Japanese Tradition: 1600 to 2000 (Introduction to Asian Civilizations)

Descrizione libro Hardcover. Condizione: New. 2nd. Hardcover. Since it was first published, Sources of Japanese Tradition, Volume 2, has been considered the authoritative sourcebook for readers and scholars interested in Japan from 1600 to 2000. Wond.Shipping may be from multiple locations in the US or from the UK, depending on stock availability. 1448 pages. 2.082. Codice articolo 9780231129848

9. Sources of Japanese Tradition: 1600 to 2000 (Introduction to Asian Civilizations)

Descrizione libro 2005. Hardcover. Condizione: New. 2nd. Hardcover. Since it was first published, Sources of Japanese Tradition, Volume 2, has been considered the authoritative sourcebook for readers and scholars interested in Japan from 1600 .Shipping may be from our Sydney, NSW warehouse or from our UK or US warehouse, depending on stock availability. 1448 pages. 2.082. Codice articolo 9780231129848