Articoli correlati a Skin in the Game: Hidden Asymmetries in Daily Life:...

Skin in the Game: Hidden Asymmetries in Daily Life: The Underlying Matrix of Daily Life 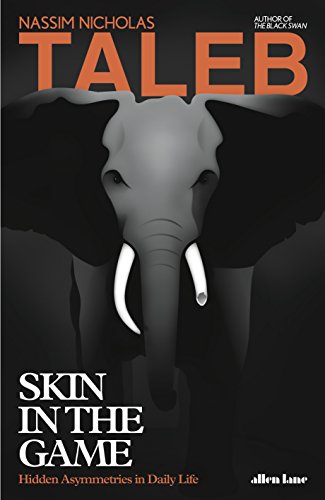 The bestselling author of The Black Swan and 'the hottest thinker in the world' (Sunday Times) is back with a book challenging many of our long-held beliefs about risk, reward, politics, religion and finance

How can a stubborn minority easily end up ruling? Should you take advice from a salesperson? Is the pope atheist?

More than the foundation of risk management, skin in the game is an astonishingly complex worldview that, as Nassim Nicholas Taleb shows in this provocative book, applies to all aspects of our lives and drives history. In his inimitable style, he draws on everything from Antaeus the Giant to Donald Trump to Seneca to the ethics of disagreement to how to buy a used car, to create a jaw-dropping tapestry for understanding this idea in a brand new way.

Full of philosophical tales and practical stories, Skin in the Game offers a key rule to live by: do not do to others what you don't want them to do to you, with its practical extension: never take advice from someone who gives advice for a living.

The hottest thinker in the world (The Times)

The most prophetic voice of all (GQ)

A superhero of the mind (Boyd Tonkin)

Imagine someone with the erudition of Pico de la Mirandola, the skepticism of Montaigne, solid mathematical training, a restless globetrotter, polyglot, enjoyer of fine wines, specialist of financial derivatives, irrepressible reader, and irascible to the point of readily slapping a disciple (La Tribune, Paris)

The author of The Black Swan is back with a simple warning: don't buy what your neighbour is selling unless he owns some too. The obvious application for this is investing, but Taleb has a much broader domain. In a kind of philosophical Freakonomics, he takes us from 5th-century wandering monks (banned by the church because they were too free) to Donald Trump (his imperfections showed he had skin in the game) (Rosamund Urwin Sunday Times Books of the Year)

Nassim Nicholas Taleb spent twenty-one years as a risk taker before becoming a researcher in philosophical, mathematical, and (mostly) practical problems with probability. Although he spends most of his time as a flâneur, meditating in cafes across the planet, he is currently Distinguished Professor at New York University's Tandon School of Engineering but self-funds his own research.

His books, Antifragile, The Black Swan, The Bed of Procrustes and Fooled by Randomness (part of a multi-volume collection called Incerto, Latin for uncertainty), have been translated into thirty-seven languages. Taleb has authored more than fifty scholarly papers as backup to Incerto, ranging from international affairs and risk management to statistical physics. He refuses all awards and honours as they debase knowledge by turning it into competitive sports.

Descrizione libro Penguin UK|Allen Lane, 2018. Kartoniert / Broschiert. Condizione: New. Bestselling author of BLACK SWAN is back with a new book about why we should only trust those who have something to lose. For a society to function properly, th. Codice articolo 144786862