Articoli correlati a The Mabinogion 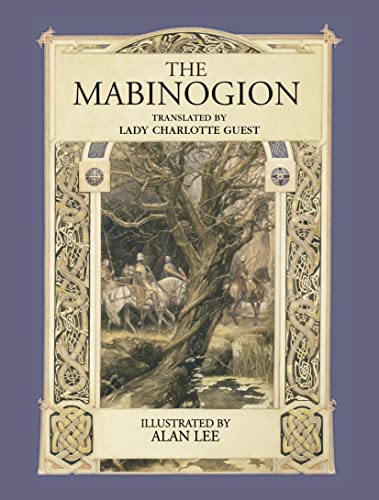 A major illustrated edition of the classic fantasy with over 50 full-colour paintings by the celebrated artist of The Lord of the Rings.

Before The Lord of the Rings there was THE MABINOGION. Widely recognized as the finest arc of Celtic mythology, the eleven stories were preserved in two Welsh collections, The White Book of Rhydderch (c.1300-1325) and The Red Book of Hergest (1375-1425), though the stories themselves hail from an oral tradition dating back to the tenth century. At its core are tales of heroes and men, birth and death, gods and beasts, penance and vindication, kinship and kingship, battles and quests.

This new edition contains the definitive translation of the work by Lady Charlotte Guest, undoubtably the most accessible of those published, and includes the tale of Taliesin, which has been missing from the collected tales of the Mabinogion for over twenty years. It also contains 50 colour paintings by Alan Lee, many appearing here for the first time. Best known for his work on the illustrated editions of The Lord of the Rings and The Hobbit, it was always Alan Lee’s ambition to illustrate THE MABINOGION, as it combines his main interests of folklore, legend and the supernatural. His style lends itself perfectly to the work and his interpretation will give enormous pleasure as the stories enter their third millennium.

Alan Lee was born in Middlesex in 1947. His illustrated books include Faeries (with Brian Froud), Castles and Merlin Dreams, and he has worked on such prestigious films as Erik the Viking (Terry Gilliam), Legend (Ridley Scott), and the acclaimed NBC miniseries Merlin. He is best known, however, for his work on the book and film versions of The Lord of the Rings and The Hobbit.

Descrizione libro HarperVoyager, 2000. Hardcover. Condizione: Used; Good. Dispatched, from the UK, within 48 hours of ordering. This book is in good condition but will show signs of previous ownership. Please expect some creasing to the spine and/or minor damage to the cover. Inscription on the first page, typically just a name but may include a dedication or a brief personal message. Ripped/damaged jacket. The dust jacket of this book is slightly damaged/ripped, however, this does not affect the internal condition. Grubby book may have mild dirt or some staining, mostly on the edges of pages. Codice articolo CHL6188705

Descrizione libro . Hardback. Condizione: Good. The book has been read but remains in clean condition. All pages are intact and the cover is intact. Some minor wear to the spine. Codice articolo GOR003526343

Descrizione libro HarperCollins. Condizione: Good. Your purchase helps support Sri Lankan Children's Charity 'The Rainbow Centre'. Shows some signs of wear but in good overall condition. Our donations to The Rainbow Centre have helped provide an education and a safe haven to hundreds of children who live in appalling conditions. Codice articolo Z1-Q-012-03254

Descrizione libro Voyager, 2000. Hardcover. Condizione: Very Good. Minor shelf wear Very Good: a copy that has been read, but is in excellent condition. Pages are intact and not marred by notes or highlighting. The spine remains undamaged. Most items will be dispatched the same or the next working day. Codice articolo wbb0014816161

Descrizione libro -HarperCollins -, 2000. Second impression of the Voyager edition 2000. Illustrated by Alan Lee. A near fine copy in dustjacket with some minor surface wear. Codice articolo 29754

Descrizione libro . Paperback. Condizione: Very Good. The book has been read, but is in excellent condition. Pages are intact and not marred by notes or highlighting. The spine remains undamaged. Codice articolo GOR001202158