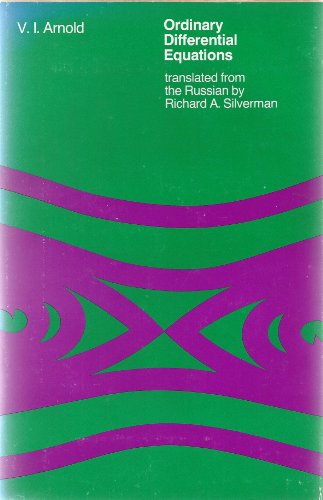 Although there is no lack of other books on this subject, even with the same title, the appearance of this new one is fully justified on at least two grounds: its approach makes full use of modern mathematical concepts and terminology of considerable sophistication and abstraction, going well beyond the traditional presentation of the subject; and, at the same time, the resulting enhancement of mathematical abstractness is counterbalanced by a constant appeal to geometrical and physical considerations, presented in the main text and in numerous problems and exercises.

In terms of mathematical approach, the text is dominated by two central ideas: the theorem on rectifiability of a vector field (which is equivalent to the usual theorems on existence, uniqueness, and differentiability of solutions) and the theory of one-parameter groups of linear transformations (equivalent to the theory of linear autonomous systems). The book also develops whole congeries of fundamental concepts—like phase space and phase flows, smooth manifolds and tangent bundles, vector fields and one-parameter groups of diffeomorphisms—that remain in the shadows in the traditional coordinate-based approach. All of these concepts are presented in some detail, but without assuming any background on the part of the reader beyond the scope of the standard elementary courses on analysis and linear algebra.

In terms of concrete applications, the book introduces the pendulum equation at the very beginning, and the efficacy of various concepts and methods introduced throughout is subsequently tested by applying them to this example. Thus, the section on first integrals leads to the law of conservation of energy; the theorem on differentiation with respect to a parameter finds application in the "method of small parameters"; and the theory of linear equations with periodic coefficients merges naturally with the study of parametric resonance. This geometrical and physical specificity is made still more vivid through the inclusion of 259 line drawings and 260 exercises in which other examples are taken up.