Articoli correlati a The Structure of the Japanese Language

Kuno, Susumu The Structure of the Japanese Language

The Structure of the Japanese Language 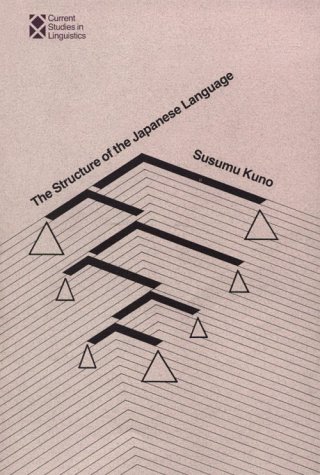 "Conventional grammars tell us when we can use given grammatical patterns. However, they almost invariably fail to tell us when we cannot use them. Many of the chapters of this book are concerned with the latter problem. They attempt to explain why some sentences that should be grammatical according to the explanations given in conventional grammars are in fact ungrammatical. In this sense, the book can be called a grammar of ungrammatical sentences.... It deals only with those problems of Japanese—and only a handful of them—that are either completely ignored or erroneously treated in conventional grammars. For these features I hope that the book will give the reader a revealing account of a kind seldom found in other Japanese grammars or in grammars of any other languages."
—from the author's Preface

Some features of Japanese are peculiarities of the language, while others are shared by English and various other languages of the world. At times two features, one in Japanese and one, for example, in English, that may look totally unrelated on casual inspection turn out to be a manifestation of the same principle, either syntactic or semantic, which governs the two languages. Whenever possible each feature of Japanese that the book discusses is contrasted with the features in English that are overtly or covertly related to it, and the similarities and differences that exist between the two languages with respect to this feature are examined. Thus the book can also be called a contrastive grammar of Japanese and English.

The book reveals a wide variety of semantic and syntactic factors (some of them not very well known to linguists working on English) that control the usage of certain grammatical patterns. It also shows what kinds of sentences the linguist working on a nonnative language should check with native speakers of the language to prove or disprove his initial hypothesis. So in a third sense, Professor Kuno's study might be called a textbook of field methods in linguistic analysis.

Because The Structure of the Japanese Language is both descriptive and analytical (the generalizations given in the book have been developed within the framework of the theory of transformational grammar but are presented without recourse to the complex formalisms of the theory), it will prove useful both as a basic handbook of supplementary reading for second-year or more advanced courses in Japanese and as a source of material for students and researchers doing work in Japanese or non-Indo-European linguistics.

This is volume three in the series, Current Studies in Linguistics.

1. The Structure of the Japanese Language (Current Studies in Linguistics) Kuno, Susumu

2. The Structure of the Japanese Language (Current Studies in Linguistics) Kuno, Susumu