Articoli correlati a Vallingsby and Farsta-from Idea to Reality: The New...

Vallingsby and Farsta-from Idea to Reality: The New Community Development Process in Stockholm 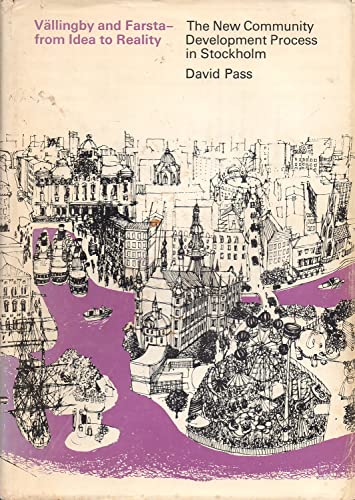 Popular and professional literature through the world has spotlighted Stockholm's accomplishments in solving its urban problems—no ghettos or urban sprawl, no slums, no poverty. And particular attention has been given to Vallingby and Farsta, two of the more than twenty suburban communities developed by the city since the Second World War. They have been featured on television and are regularly visited by city administrators, economists, planners, architects, real estate developers, and government officials. Some of their features are clearly visible in the new American towns of Reston and Columbia, and they have served as one of the models for pending federal new-communities legislation. Yet, in spite of this interest, this book is the first full-scale study of the development of these new towns.

The book is developed as a case study of some aspects of the planning and construction of Vallingby and Farsta—built under the direction of the City of Stockholm—and deals in detail with the questions: What was the political and administrative framework in which the planning and building of these communities was carried out? Who were the major participants? What were their responsibilities? How were their efforts coordinated? And what were the problems that they faced? An empirical description, an analysis of the methods and procedures used in organizing the planning and building of the two communities, and an identification and analysis of the system of organized institutions and a series of administrative procedures which made possible their creation, are presented. The investigation includes the emergence and development of ideas as well as administrative procedures.

This study examines the planning for the development areas of Vallingby and Farsta in Stockholm from 1930 to 1960, concentrating in the main on those general plan proposals and efforts that were "comprehensive"; that is, which attempted to inaugurate a new suburban city form. Printed documents (plans, city council records, city commissioners' records, committee minutes, reports, and official memoranda) served as a source of information about the more formal aspects of the urban planning process. But to find out how proposals, compromises, and decisions were made and carried out, the author conducted interviews with the people themselves, the people whose daily actions and decisions lie behind the summaries of records and documents.

More than sixty tape-recorded interviews with participants involved in the Vallingby and Farsta development process were made. The participants interviewed included councilmen, commissioners, city board members, directors of municipal offices, representatives of financial institutions, and builders. The information the respondents provided offers insights into the "how" and "why" of the urban planning process. The tabulation and correlation of these responses, analyzed in connection with the other research information, leads to valuable statements about this process.

1. VALLINGBY AND FARSTA - FROM IDEA TO REALITY: The New Community Development Process in Stockholm

2. VALLINGBY AND FARSTA--from Idea to Reality: The New Community Development Process in Stockholm

3. VĂ¤llingby and Farstaâ "from Idea to Reality: The New Community Development Process in Stockholm

Descrizione libro The MIT Press 1973-08-15, 1973. Hardcover. Condizione: Very Good. Item is in very good condition. If supplemental codes/CDs for textbooks are required please contact us prior to purchasing as they may be missing. Photos are stock pictures and not of the actual item. Codice articolo DS-026216034X-2

4. Vällingby and Farsta&mdash;from Idea to Reality: The New Community Development Process in Stockholm

5. Vällingby and Farsta--from Idea to Reality; the New Community Development Process in Stockholm