Articoli correlati a Achtung Architektur!: Image and Phantasm in Contemporary... 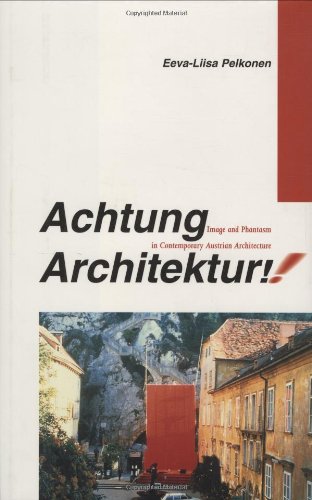 "Beware Architecture!" Architecture that entails surprise, even danger, is the subject of this exciting discourse on a body of work that has gained increasing international attention since the late 1970s and early 1980s, when Graz and Vienna came to represent the radical edge of European architecture. Eeva-Liisa Pelkonen looks at how this architecture tests the limits of the modern tradition, bringing to light work that is little known yet extremely consequential for contemporary theoretical discourse.

Forged in a rarified architectural climate dominated by postwar Marxist-Freudian trends, the Austrian avant-garde challenges the traditional paradigms of objecthood, compositional form, programmic functionality, and spatial closure, emphasizing the fictional and the fantastic embodied in the more peripheral notions within the modern tradition: glass, ornament, machine mysticism, and the organic gestural line.

Pelkonen moves between a solid analysis of individual works of architects and firms such as Volker Giencke, Günter Domenig, Klaus Kada, Helmut Richter, COOP Himmelblau, and Haus-Rucker-Co, and others, and their historical and cultural contexts: philosophical debates on Heidegger, Bloch, Derrida, Merleau-Ponty, and Giorgio Agamben; and the postwar debate on the avant-garde through the works of Joseph Beuys, Gerhard Richter, Francis Bacon, and the Wiener Aktionisten.

Eeva-Liisa Pelkonen teaches architectural design and theory at the Yale School of Architecture.