Articoli correlati a The Size Of Nations

The Size Of Nations 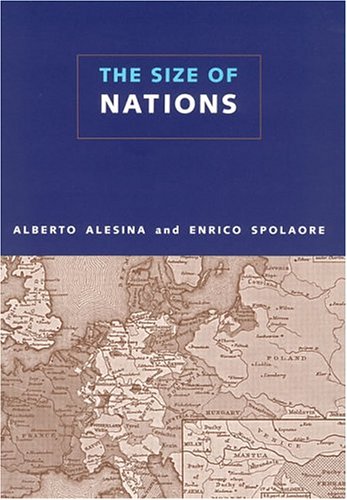 The authors of this timely and provocative book use the tools of economic analysis to examine the formation and change of political borders. They argue that while these issues have always been at the core of historical analysis, international economists have tended to regard the size of a country as "exogenous," or no more subject to explanation than the location of a mountain range or the course of a river. Alesina and Spolaore consider a country's borders to be subject to the same analysis as any other man-made institution. In The Size of Nations, they argue that the optimal size of a country is determined by a cost-benefit trade-off between the benefits of size and the costs of heterogeneity. In a large country, per capita costs may be low, but the heterogeneous preferences of a large population make it hard to deliver services and formulate policy. Smaller countries may find it easier to respond to citizen preferences in a democratic way. Alesina and Spolaore substantiate their analysis with simple analytical models that show how the patterns of globalization, international conflict, and democratization of the last two hundred years can explain patterns of state formation. Their aim is not only "normative" but also "positive"—that is, not only to compute the optimal size of a state in theory but also to explain the phenomenon of country size in reality. They argue that the complexity of real world conditions does not preclude a systematic analysis, and that such an analysis, synthesizing economics, political science, and history, can help us understand real world events.

Enrico Spolaore is is Professor of Economics at Tufts University.

1. The Size of Nations (The MIT Press)

2. The Size of Nations (The MIT Press)

3. The Size of Nations (The MIT Press)

4. The Size of Nations (The MIT Press)