Articoli correlati a The Enlightenment and the Birth of Modern Nationhood:...

Walicki, Andrzej The Enlightenment and the Birth of Modern Nationhood: Polish Political Thought from Noble Republicanism to Tadeusz Kosciuszko

The Enlightenment and the Birth of Modern Nationhood: Polish Political Thought from Noble Republicanism to Tadeusz Kosciuszko 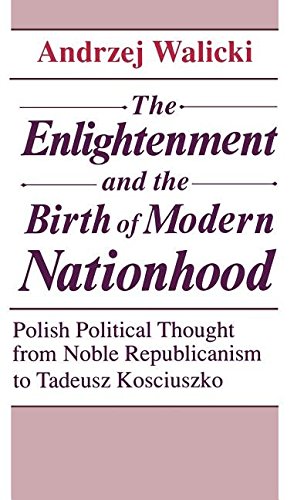 Renowned historian Andrzej Walicki here challenges the conventional understanding of the rise of nationalism and the nation-building process in East-Central Europe. Arguing that the views advanced by Hans Kohn and others are marred by an inadequate knowledge of Polish history and thought, Walicki examines the emerging nationalism of the eighteenth century in a comparative perspective. He shows how Poland, the largest state in East-Central Europe, developed a modem national consciousness and, in fact, a political nationalism earlier and more successfully than has generally been acknowledged. Walicki presents his case by examining the main currents of Polish thought in the Enlightenment from Noble Republicanism to the development of the progressive constitution of May 3, 1791. A final chapter analyzes the ideas of Tadeusz Kosciuszko, the leader of the Polish uprising of 1794, showing him as an ideologist of "new republicanism" and a bridge between the Enlightenment and Romantic periods. This chapter will be of particular interest to readers familiar with Kosciuszko as a hero of the American Revolution.

1. The Enlightenment and the Birth of Modern Nationhood: Polish Political Thought from Noble Republicanism to Tadeusz Kosciuszko (English and Polish Edition)

Descrizione libro Univ of Notre Dame Pr, 1989. Condizione: Good. A+ Customer service! Satisfaction Guaranteed! Book is in Used-Good condition. Pages and cover are clean and intact. Used items may not include supplementary materials such as CDs or access codes. May show signs of minor shelf wear and contain limited notes and highlighting. Codice articolo 0268006180-2-4