Articoli correlati a Representing Belief: Religion, Art, and Society in... 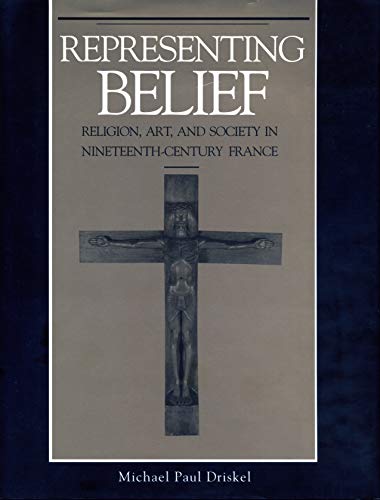 Representing Belief provides a detailed discussion and analysis of the forms and meanings in religious art of nineteenth-century France. This genre, usually assigned minimal importance by writers on the period, turns out to occupy a central place in the cultural history of the era, touching the core of the century's conflict between tradition and modernity, science and faith, ultramontanism and naturalism. Although it was generally assumed that this kind of art was of little importance in the evolution of modern painting, Driskel demonstrates that in reality it played a crucial role. Many of the artists discussed are firmly installed in the present canon (Delacroix, Ingres, Manet, Gauguin), while others (Flandrin, Orsel, Gleyre, Cazin) were major figures in their own time, though largely forgotten today.

Writing from an interdisciplinary perspective and employing concepts derived from structuralist and poststructuralist theory, Driskel moves beyond simple formalism to restore a category of once-important works to a meaningful context, thereby offering others a model by which to discuss and interpret these paintings. Carefully charting the genealogies of hieraticism and naturalism, he demonstrates that a dramatic shift occurred in the 1860s and 1870s as naturalism gained acceptance among ultramontanes and the hieratic mode began to attract the interest of adherents to the belief system of modernism.Representing Belief is the first book to situate this art in its social and historical contexts and to approach it from this point of view.