Articoli correlati a Multilingualism and Mother Tongue in Medieval French,... 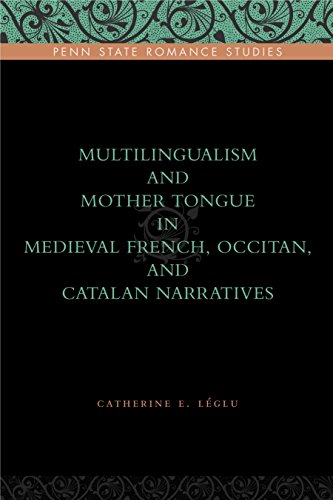 "Occitan specialist Catherine Leglu has hit her stride with this original and timely study. Nuanced analysis, theoretically informed argument, and bold readings of narrative images combine to restore the marginal and the hybrid to the center of Romance studies in this fascinating journey through the crisscrossing pathways of late medieval Romance vernacularity."---Sarah Kay, Princeton University

The Occitan literary tradition of the later Middle Ages is a marginal and hybrid phenomenon, caught between the preeminence of French courtly romance and the emergence of Catalan literary prose. In this book, Catherine Leglu brings-together, for the first time in English, prose and verse texts that are composed in Occitan, French, and Catalan---sometimes in a mixture of two of these languages. This book challenges the centrality of "canonical" texts and draws attention to the marginal, the complex, and the hybrid. It explores the varied ways in which literary works in the vemacular composed between the twelfth and fifteenth centuries narrate multilingualism and its apparent opponent, the mother tongue. Leglu argues that the mother tongue remains a fantasy, condemned to alienation from linguistic practices that were, by definition, multilingual. As most of the texts studied in this book are works of courtly literature, these linguistic encounters are often narrated indirectly, through literary motifs of love, rape, incest, disguise, and travel.

Catherine E. Leglu is Reader in French Studies at the University of Reading. She is the author of Between Sequence and Sirventes: Aspects of Parody in the Troubadour Lyric (2000)

Catherine E. Léglu is Reader in French Studies at the University of Reading. She is the author ofBetween Sequence and Sirventes: Aspects of Parody in the Troubadour Lyric (2000).