Articoli correlati a The Stripping of the Altars: Traditional Religion in...

Duffy, Eamon The Stripping of the Altars: Traditional Religion in England, C.1400-C.1580

The Stripping of the Altars: Traditional Religion in England, C.1400-C.1580 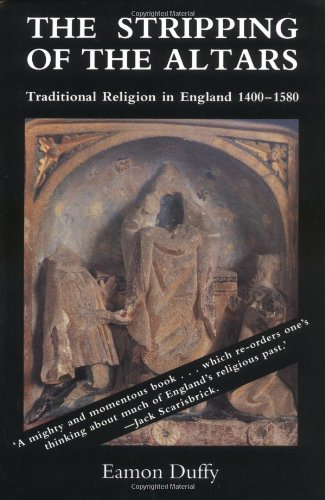 This book offers a fundamental challenge to much that has been written about the pre-Reformation church. Eamon Duffy recreates 15th-century English laypeople's experience of religion, revealing the richness and complexity of the Catholicism by which men and women structured their experience of the world and their hopes within and beyond it. He then tells the story of the destruction of that Church - the stripping of the altars - from Henry VIII's break with the papacy until the Elizabethan settlement. Bringing together theological, liturgical, literary and iconographic analysis with historical narrative, Duffy argues that late medieval Catholicism was neither decadent nor decayed but was a strong and vigorous tradition, and that the Reformation represented a violent rupture from a popular and theologically respectable religious system. The first part of the book reviews the main features of religious belief and practice up to 1536. Duffy examines the factors that contributed to the close lay engagement with the structures of late medieval Catholicism: the liturgy; the impact of literacy and printing on lay religious knowledge; the conventions and contents of lay prayer; the relation of orthodox religious practice and magic; the Mass and the cult of the saints; and the lay belief about death and the afterlife. In the second part of the book Duffy explores the impact of Protestant reforms on this traditional religion, providing evidence of popular discontent from medieval wills and from parish records. He documents the widespread opposition to Protestantism during the reigns of Henry and Edward, discusses Mary's success in reestablishng Catholicism and describes the public resistance to Elizabeth's dismantling of parochial Catholicism that did not wane until the late 1570s.

3. The Stripping of the Altars: Traditional Religion in England, 1400-1580 Duffy, Eamon