Articoli correlati a Ornament and Abstraction: The Dialogue Betweenm Non-Western,... 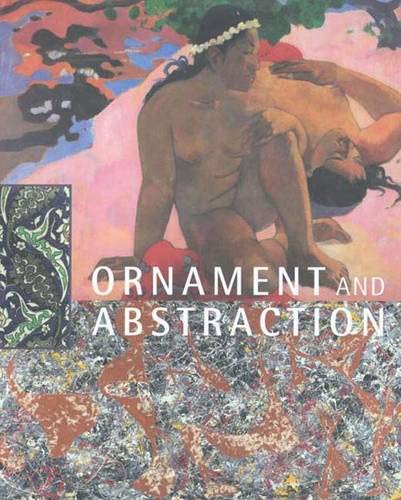 This book is an in-depth study of this major theme in 20th century art history. It begins with the innovative pictorial conception of Philipp Otto Runge, whose early 19th century paintings featured the last genuine form in the history of ornament, the arabesque. The arabesque had an influence via Symbolism (Maurice Denis, Paul Gauguin) and Art Nouveau (Henry van de Velde, Gustav Klimt, Josef Hoffmann) on painting's move towards abstraction (Vasily Kandinsky, Frantisek Kupka, Adolf Hoelzel), which resulted on the one hand in a non-figurative, geometric structure of lines (Mondrian), and on the other, in the swirls of Matisse and Jackson Pollock. Side by side with the "royal way" of Cubism, arabesque abstraction therefore opens up a second doorway to the world of non-figurative art.
Significant influences also result from the modern artists' preoccupation with the ornamentation found in distant cultures, such as Matisse with the Orient and Oceania, Ad Reinhardt with Asian culture, and American painting with pre-Columbian ornament (Josef Albers, Barnett Newman). Referring also to Minimalism, new media, digital technology, the Renaissance and the Rococo, the book celebrates the impact of ornament on abstract art, as well as showcasing a remarkable array of masterpieces.

1. ORNAMENT AND ABSTRACTION: THE DIALOGUE BETWEEN NON-WESTERN, MODERN AND CONTEMPORARY ART

2. Ornament and Abstraction - The Dialogue Between non-Western, Modern and Contemporary Art

Descrizione libro Fondation Beyeler / Dumont, Basel, 2001. Red Cloth Boards. Condizione: Very Good. Condizione sovraccoperta: Very Good. First Edition. In-depth study of the importance of ornament in the development of abstract art, published on the occasion of an exhibition at Fondation Beyeler in 2001. 255pp, illustrated throughout with colour reproductions. Grey endpapers and titles. Rear panel and flyleaf of dustwrapper have been printed upside down. Last two pages are glued together, otherwise very good copy with no inscriptions. VERY HEAVY BOOK, additional postage will be requested. Size: Folio - over 12" - 15" tall. Codice articolo 007766

Descrizione libro Dumont Buchverlag, 2002. Condizione: Good. A+ Customer service! Satisfaction Guaranteed! Book is in Used-Good condition. Pages and cover are clean and intact. Used items may not include supplementary materials such as CDs or access codes. May show signs of minor shelf wear and contain limited notes and highlighting. Codice articolo 0300092261-2-4

6. Ornament and Abstraction: The Dialogue between non-Western, modern and contemporary Art

Descrizione libro Dumont Buchverlag 2002-01-11, 2002. Hardcover. Condizione: Good. No Jacket. Item is in good condition. Some moderate creases and wear. This item may not come with CDs or additional parts including access codes for textbooks. This may not have a dust jacket. Might be an ex-library copy and contain writing/highlighting. Photos are stock pictures and not of the actual item. Codice articolo DS-0300092261-3