Articoli correlati a The Collector: The Story of Sergei Shchukin and His...

Semenova, Natalya The Collector: The Story of Sergei Shchukin and His Lost Masterpieces

The Collector: The Story of Sergei Shchukin and His Lost Masterpieces 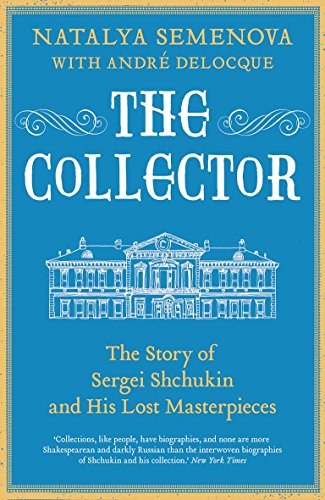 A fascinating life of Sergei Shchukin, the great collector who changed the face of Russia’s art world

Sergei Shchukin was a highly successful textiles merchant in the latter half of the nineteenth century, but he also had a great eye for beauty. He was one of the first to appreciate the qualities of the Impressionists and Post-Impressionists and to acquire works by Cézanne, Matisse, and Picasso. A trailblazer in the Russian art world, Shchukin and his collection shocked, provoked, and inspired awe, ridicule, and derision among his contemporaries.

This is the first English-language biography of Sergei Shchukin, written by art historian Natalya Semenova and adapted by Shchukin's grandson André Delocque. Featuring personal diary entries, correspondence, interviews, and archival research, it brings to light the life of a man who has hitherto remained in the shadows, and shows how despite his controversial reputation, he opened his collection to the public, inspiring a future generation of artists and changing the face of the Russian art world.

'Exhilarating... The Collector's ravishing illustrations show the 30 Matisses in Shchukin's favourite room glowing deep blue or sonorous green: a glamorous backdrop for this proud, lonely man, haunted by his family's urge to self-destruction, playing art against fate. Russian art historian Semenova, with the help of Shchukin's grandson André Delocque, wonderfully evokes the contradictory worlds of the thrusting Moscow merchant class and the swirling ferment of the pre-Bolshevik city. The convergence made possible Shchukin's unique collection, providing limitless funds, and also spurring a visceral understanding of the revolutionary rush of modernism, its tragic undercurrent and yearning for a new world.'--Jackie Wullshlager, Financial Times

'For more than 15 years, Shchukin's paintings (a breathtaking assemblage of Monets, Cézannes, Gauguins, Van Goghs, Matisses and Picassos) had caused as much outrage and derision in Moscow as praise and admiration: according to one newspaper, the paintings were simply an 'excretion of manners and viscous muck'. In their biography of the collector, the art historian Natalya Semenova and Shchukin's grandson André Delocque show that overcoming difficulties was nothing new to him... They transmit the daring of the man and his determination to face down naysayers.'--Michael Prodger, The Sunday Times

'Sergei Shchukin combined vast financial power with a humble readiness to submit to his 'inner trembling' before works of art. The Collector is a momentous work of excavation and restitution, which brilliantly evokes the life of a great Russian family, through times of exuberant acquisition and devastating loss.'--Rachel Polonsky, author of Molotov's Magic Lantern --Rachel Polonsky

'Semenova and Delocque tell the gripping story of Sergei Shchukin, a merchant whose wealth and artistic intuition led to an immense and unparalleled panopticon of works by Cézanne, Gauguin, Matisse, Monet, Picasso. The Collector follows the biographical trajectory - family, education, cultural ambience - of this latter-day Maecenas. The authors demonstrate how the Shchukin collection served as a major source of inspiration to the Russian avant-garde and how, in spite of emigration, war, revolution and ideological aggression, it became one of the Soviet Union's most prized artistic possessions.'--John E. Bowlt, author of Russian Art of the Avant-Garde --John E. Bowlt

'With the publication of this admirable book, the first up-to-date, in-depth study in English, we can at last fully understand Sergei Shchukin's seminal importance as an art collector, not only in the early career of Henri Matisse, but in the meteoric rise of the Moscow avant-garde on the eve of 1917. For this we have to thank Natalya Semenova. Her painstaking research during the decades of Soviet neglect has resulted in the resurrection of a truly remarkable individual, whose life story she tells here with all the aplomb that came to be associated with Shchukin himself.'--Rosamund Bartlett, author of Tolstoy: A Russian Life --Rosamund Bartlett

Natalya Semenova is a Russian art historian. She is coauthor of Matisse Et La Russie and coeditor of Selling Russia's Treasures: The Soviet Trade In Nationalized Art, 1917–1938. André Delocque is Sergei Shchukin’s grandson.

1. The Collector: The Story of Sergei Shchukin and His Lost Masterpieces

Descrizione libro Condizione: New. This is a brand new book! Fast Shipping - Safe and Secure Mailer - Our goal is to deliver a better item than what you are hoping for! If not we will make it right!. Codice articolo 1XGJHR0009SB_ns

2. The Collector: The Story of Sergei Shchukin and His Lost Masterpieces

3. THE COLLECTOR: THE STORY OF SERG

4. THE COLLECTOR: THE STORY OF SERG

5. THE COLLECTOR: THE STORY OF SERG

6. THE COLLECTOR: THE STORY OF SERG

7. THE COLLECTOR: THE STORY OF SERG

8. The Collector: The Story of Sergei Shchukin and His Lost Masterpieces

9. THE COLLECTOR: THE STORY OF SERG

10. THE COLLECTOR: THE STORY OF SERG