Articoli correlati a The Time Machine/ The Invisible Man/ The War of the...

Wells, H. G. The Time Machine/ The Invisible Man/ The War of the Worlds [Lingua Inglese] 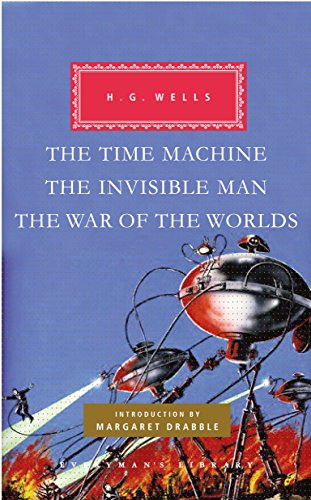 Gathered together in one hardcover volume: three timeless novels from the founding father of science fiction.

The first great novel to imagine time travel, The Time Machine (1895) follows its scientist narrator on an incredible journey that takes him finally to Earth’s last moments—and perhaps his own. The scientist who discovers how to transform himself inThe Invisible Man (1897) will also discover, too late, that he has become unmoored from society and from his own sanity.The War of the Worlds (1898)—the seminal masterpiece of alien invasion adapted by Orson Welles for his notorious 1938 radio drama, and subsequently by several filmmakers—imagines a fierce race of Martians who devastate Earth and feed on their human victims while their voracious vegetation, the red weed, spreads over the ruined planet.

Here are three classic science fiction novels that, more than a century after their original publication, show no sign of losing their grip on readers’ imaginations.

H. G. Wells (1866–1946) was a prolific English writer in many genres, prominent in his time as a socialist and a pacifist as well as a pioneer of science fiction.

Margaret Drabble is the award-winning author of seventeen novels, including The Seven Sisters, The Peppered Moth, The Witch of Exmoor,and The Needle’s Eye. She has written several biographies and works of nonfiction and editedThe Oxford Companion to English Literature. She lives in London and Somerset.

From the Introduction
by Margaret Drabble

H. G. Wells was an astonishingly versatile and prolific writer. He did not invent science fiction single-handed but he had an overwhelmingly powerful influence on the development of the genre, and produced some of its classic early examples. Generations of novelists have born witness and paid homage to him, from Arthur C. Clarke, Brian Aldiss and Doris Lessing to younger practitioners such as China Miéville and Greg Bear. George Orwell, who was to create perhaps the most famous dystopia of all, claimed in 1941, four years before Wells died, that 'the minds of all of us, and therefore the physical world, would be perceptibly different if Wells had never existed.'* The plots and themes of Wells live on in innumerable screen versions, reminding us that the legendary radio adaptation of The War of the Worlds in 1938 by a young Orson Welles nearly brought New Jersey to a panic-stricken halt. This was the first alien invasion, and it continues to spawn imitations.

The world of academe has been uneasy about Wells's literary status, and it is interesting to note that his French predecessor and rival Jules Verne (1828-1905), who confined himself more exclusively to the scientific romance and the adventure story, enjoys a more secure position in the French canon than Wells does in ours, and remains the darling of intellectuals and the French avant-garde. The English like Verne, but they do not revere him or take him seriously. Wells today has eloquent and scholarly champions, but is reputation rests on his popular appeal, which has not diminished. He was in his day a great popularizer, and professed to despise the high and polished art of his contemporary Henry James (1843-1916).

Three of his most celebrated stories appear in this volume, all written when he was a young man and long before the label 'science fiction' was coined, but the subject of space travel and speculations about the evolutionary future of the human race obsessed him all his life, finding a final expression in his last work, Mind at the End of Its Tether (1945), which (like his first novella in 1895) foresaw the annihilation of our species. He peered into the future, and he did not always like what he saw. He used the form of fiction for satiric, political and prophetic purposes, writing from a temperament that shifted, at times violently, between social optimism and dystopian despair. These short novels m ay be read as simple, thrilling (and for the most part largely implausible) tales of fantastic adventure, but they also lodge in the memory as a many-layered and at times disquietingly aggressive fables.

All three are charged with the youthful energy and ambition that rescued Wells from an inauspicious childhood and propelled him to international fame. His own life was something of a fantasy, which at times seemed to him to constitute an improbable escape, against the odds, from a social class and family background that would have imprisoned a weaker man. (At other times he was to see himself more as a representative figure of a new age.) He was born Herbert George Wells in 1866 in the small market town of Bromley in Kent, then rural but now engulfed by London's suburbia. He was the third son of an unsuccessful shopkeeper and a mother who supported the family finances by working below stairs as a housekeeper at a country house called Uppark in neighbouring Sussex, where she had once been a lady's maid. The house, by one of those happy accidents that may counterbalance an otherwise poor start in life, had a fine library to which, as a boy, he had access. Thus, from his boyhood, lessons of class, of leisured privilege versus paid labour, were imprinted on his mind, more spatially and dramatically than by any political tract. He was to project the imagery of upstairs-downstairs worlds into grotesque and unearthly formations.

At the age of fifteen, in 1881, he was apprenticed as a draper in a department store in Southsea, Hampshire, a dead end job which he loathed (and which inspired several of his early comic realist novels) and from which he escaped, with some difficulty, by winning a scholarship in 1884 to the Normal School of South Kensington in London, now part of Imperial College. There he studied biology and zoology under the celebrated evolutionist T. H. Huxley, during the period of intense intellectual excitement and controversy newly aroused by Darwin's revelations. This apprenticeship profoundly affected Wells's work, and provided him with visionary dreams and insights that far outshone his performance as a student, and were to inform much of his fiction. The small horizons of a shopkeeper's apprentice or a chemist's assistant opened into a vast world of knowledge and possibility, in an unimaginably altered timescale extending back into a prehistoric past, and forward into a cosmic future.

But Wells was too impatient by temperament to pursue a career as a scientist, and his academic progress as a student and subsequently as a teacher was neither smooth nor easy. Eventually in 1890 he gained a first class degree in zoology at the University of London, and became a biology tutor, but these early years were marked by poverty, drudgery, frustration, bouts of serious ill health and an unfortunate and doomed marriage to a cousin in 1891. His health remained problematic, and his sexual life was to be, for the times, highly unorthodox: in 1893 he eloped with and eventually married one of his students, but this did not restrain him in later life from further and sometimes notorious liaisons. He was highly charged with what his friend and sparring partner Bernard Shaw saw as the anarchic Life Force and he possessed as powerful a will to succeed as a Nietzschean superman.

Success came to him not overnight, but nevertheless with some sense of drama. The genesis of his first novel, The Time Machine, was slow, as it made its way through various early drafts, but its publication in volume form in 1895 made him famous and initiated a rich decade during which he composed his vivisectionist evolutionary nightmare, The Island of Doctor Moreau (1896), quickly followed by The Invisible Man (1897), The War of the Worlds (1898), When the Sleeper Wakes (1899) and The First Men in the Moon (1901). This was the prime period of his science fiction, but it also produced several of his more benign comedies of lower middle-class life, including Love and Mr Lewisham (1900), Kipps (1905) and The History of Mr Polly (1910). It also saw him move, with Tono-Bungay (1909), towards  a more ambitious and literary portrayal of contemporary society. As we have seen, speculations and predictions about the future and experimental treatments of time travel continued to haunt him, but these last years of the nineteenth century gave us what we now recognize as vintage Wells, playful, provocative, and popular. He had found his métier.

1. The Time Machine, The Invisible Man, The War of the Worlds (Everyman's Library)

2. The Time Machine, the Invisible Man, the War of the Worlds (Hardback or Cased Book)

3. The Time Machine, The Invisible Man, The War of the Worlds (Everymans Library Classics Series)

4. The Time Machine, The Invisible Man, The War of the Worlds (Everymans Library Classics Series)

5. The Time Machine, The Invisible Man, The War of the Worlds (Everymans Library Classics Series)

6. The Time Machine, The Invisible Man, The War of the Worlds (Everymans Library Classics Series)

7. The Time Machine, The Invisible Man, The War of the Worlds (Everymans Library Classics Series)

8. The Time Machine, The Invisible Man, The War of the Worlds (Everymans Library Classics Series)

9. The Time Machine, The Invisible Man, The War of the Worlds (Everymans Library Classics Series)

10. The Time Machine, The Invisible Man, The War of the Worlds (Everymans Library Classics Series)