Articoli correlati a An Introduction to Modern Astrophysics: International... 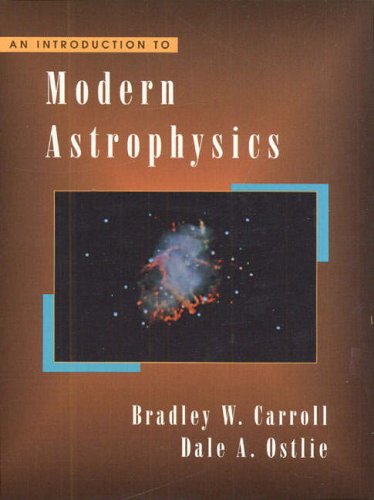 This exciting text opens the entire field of modern astrophysics to the reader by using only the basic tools of physics. Designed for the junior- level astrophysics course, each topic is approached in the context of the major unresolved questions in astrophysics. The core chapters have been designed for a course in stellar structure and evolution, while the extended chapters provide additional coverage of the solar system, galactic structure, dynamics, evolution, and cosmology.

Brad's lifelong fascination with astronomy, combined with a happy naivete concerning what lay ahead, led him to graduate school at CU Boulder. His thesis, supervised by Carl Hansen and John Cox, was a study of the effect of rotation on pulsating stars. Brad then headed east to work as a postdoc with Hugh Van Horn at the University of Rochester, where he carried out research on the oscillations of accretion disks and neutron stars. At both CU Boulder and the U of R, he learned the virtues of making simple models of complex astrophysical systems. .

Four years later, as the postdoc came to an end, Brad was lucky to find a teaching position in the Physics Department at Weber State University, and doubly lucky that Dale Ostlie was there. It is rare to find two experts in Stellar pulsation in the same institution and department, especially when their outlooks are congenial. .

Brad truly enjoys teaching which gives him the chance to share the wonders of the physical world with his students. Such a background served him well (especially his naivete about what lay ahead) when he and Dale decided to write An Introduction to Modern Astrophysics. Now that the book and solutions manual, are completed, Brad once again has the time to enjoy traveling, camping, and fishing.

Dale A. Ostlie's long-time interest in astronomy began with his childhood fascination in the space program, including vivid recollections of watching the Apollo missions with his family. His interest in teaching was born from his experiences as a student, being fortunate to have had excellent instructors and mentors in high school, college, and graduate school. During graduate school, Dale had the opportunity to spend a significant period of time working with Dr. Arthur N. Cox and the theoretical astrophysics group at Los Alamos National Laboratory. While at Los Alamos, Dale was introduced to great number of exciting and challenging problems in astrophysics, which spurred his interest in developing a broad exposure to the discipline.

After completing his graduate thesis on Mira variable stars, and after a two-year teaching position at Bates College in Maine, Dale accepted a teaching position at Weber State University. With WSU nestled up against the Wasatch mountains of Utah, Dale is able to indulge his addictions to skiing, hiking, camping, and mountain biking. One year after Dale arrived at Weber State, Brad Carroll was hired, and their partnership in stellar pulsation studies and text-book writing was born. Sharing many of the same pedagogical views, as well as a dedication to producing the best possible text, Brad and Dale worked for six years to write An Introduction to Modern Stellar Astrophysics and An Introduction to Modern Astrophysics, and another year to produce the Instructor's Solutions Manual. Work related to the texts continues today with the maintenance of a collection of web pages associated with the books, including discussions of new discoveries since the publication of the texts in 1996.

Descrizione libro Paperback. Condizione: Fair. A readable copy of the book which may include some defects such as highlighting and notes. Cover and pages may be creased and show discolouration. Codice articolo GOR006206572

Descrizione libro Condizione: Fair. This is an ex-library book and may have the usual library/used-book markings inside.This book has soft covers. With usual stamps and markings, In fair condition, suitable as a study copy. Please note the Image in this listing is a stock photo and may not match the covers of the actual item,2250grams, ISBN:9780321210302. Codice articolo 8817504

Descrizione libro Paperback. Condizione: Very Good. Very Good: a copy that has been read, but is in excellent condition. Pages are intact and not marred by notes or highlighting. The spine remains undamaged. Most items will be dispatched the same or the next working day. Codice articolo wbb0020768151