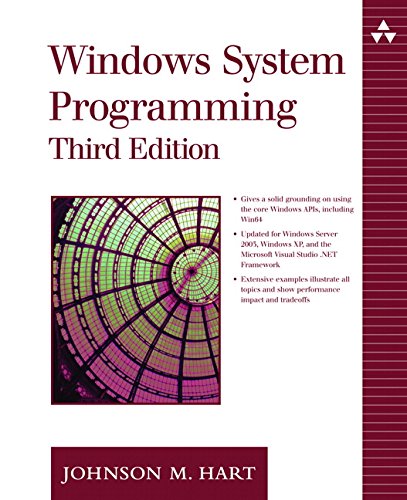 "If you're a systems-level 32-bit or 64-bit Windows developer, whether using the Windows API directly or via .NET interop, you'll definitely want to take a look at this update to Johnson Hart's well-respected and well-loved book. Johnson starts with Windows history and cultural issues and moves through basic and advanced system services in a thoughtful, thorough manner. If Mr. Rogers wrote a book with David Cutler, this is what they'd come up with."
–Chris Sells, Longhorn Content Strategist,
Microsoft Corporation

"While focusing on UNIX developers that are looking to augment their skills or simply jump ship, Windows System Programming, Third Edition is a book that even some seasoned systems-level Windows developers will undoubtedly find useful. This is not your average bland GUI treatise; Hart takes you down to the metal, explains all the relevant concepts clearly and in-depth, and gives you an extensive library of high-quality code examples that can be easily adapted for your own larger applications. Even if you've created server applications before, Windows System Programming will teach you new tricks, shed new light on concepts you thought you'd mastered, and offer new strategies for creating robust and secure solutions."
–Klaus H. Probst, Senior Architect,
Spherion Technology Services; Microsoft MVP

"This book is quite easy to follow; there are clear explanations of everything. Even the explanation of the standards is readable! For a developer not familiar with developing with Windows, Hart's book also provides basic information on where Windows was and where it is today, plus a great explanation of how it is different from Posix and Unix."
–Eric Landes, Microsoft MVP,
www.aspalliance.com/corporatecoder

"Even advanced developers will always need to have a book like this one on hand when the abstractions of a platform like .NET are inadequate or when they need to know more about how .NET is implemented. And the focus on low-level programming (specifically memory management and IO) and other non-GUI topics makes it stand out as superior among other Windows programming books. In keeping the GUI focus to a minimum, Hart's book is able to be comprehensive on the topics contained within."
–Michael Davidson, IT Analyst

A practical guide to the central features and functions of the Windows API, Windows System Programming, Third Edition, will get you up and running with Windows XP and 2003, as well as other Windows systems. Unlike most Windows programming resources, this book focuses exclusively on the core system services–file system, memory, processes and threads, synchronization, communication, and security–rather than on the more commonly featured graphical user interface functions. Especially geared for those already familiar with UNIX or other high-end operating systems, Windows System Programming, Third Edition, helps you to build on your knowledge base to learn the most important features quickly and easily.

This new edition has been updated and enhanced with coverage of new API functions, network programming, Windows Services, process and thread management, synchronization, and application performance on single and multiprocessor systems. It also describes techniques for porting applications to Win64, the new Windows 64-bit API.

Johnson M. Hart is a software trainer and consultant specializing in Windows, L inux, and UNIX application development, enhancement, and maintenance. John develops and delivers professional training courses and seminars to clients worldwide, and he is the author of numerous technical articles.