Articoli correlati a Molecular Biology of the Gene

Molecular Biology of the Gene 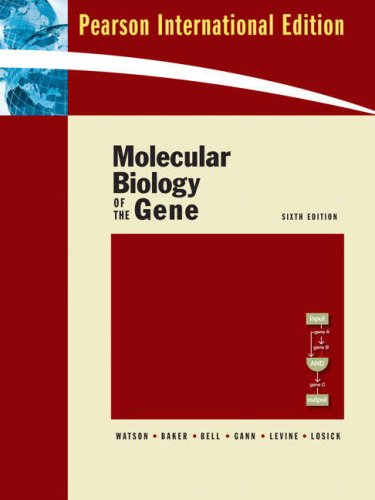 The classic textbook in molecular biology, updated with new chapters, new information, and new media. Completely up-to-date with the latest research advances, the Sixth Edition of James D. Watson's classic text, Molecular Biology of the Gene retains the distinctive character of earlier editions that has made it the most widely used book in molecular biology. Twenty-two concise chapters, co-authored by six highly respected biologists, provide current, authoritative coverage of an exciting, fast-changing discipline. Two new chapters discuss the emerging research fields of Regulatory RNAs (Chapter 18) and Genomics and Systems Biology (Chapter 20), and give particular focus on RNAi, microRNAs, the opportunities offered by the new generation of genome technologies, and the elucidation of gene regulatory networks. Every chapter includes thorough content updates, and where relevant, the inclusion of medical insights that have emerged from our understanding of basic molecular biology, and references that direct students to explore the expanded companion website.

James D. Watson was Director of Cold Spring Harbor Laboratory from 1968 to 1993, President from 1994 to 2003, and is now its Chancellor. He spent his undergraduate years at the University of Chicago and received his Ph.D. in 1950 from Indiana University. Between 1950 and 1953, he did postdoctoral research in Copenhagen and Cambridge, England. While at Cambridge, he began the collaboration that resulted in the elucidation of the double-helical structure of DNA in 1953. (For this discovery, Watson, Francis Crick, and Maurice Wilkins were awarded the Nobel Prize in 1962.) Later in 1953, he went to the California Institute of Technology. He moved to Harvard in 1955, where he taught and did research on RNA synthesis and protein synthesis until 1976. He was the first Director of the National Center for Genome Research of the National Institutes of Health from 1989 to 1992. Dr. Watson was sole author of the first, second, and third editions of Molecular Biology of the Gene, and a co-author of the fourth and fifth editions. These were published in 1965, 1970, 1976, 1987, and 2003, respectively. He is also a co-author of two other textbooks:  Molecular Biology of the Cell and Recombinant DNA.

Tania A. Baker is the Whitehead Professor of Biology at the Massachusetts Institute of Technology and an Investigator of the Howard Hughes Medical Institute. She received a B.S. in biochemistry from the University of Wisconsin, Madison, and a Ph.D. in biochemistry from Stanford University in 1988. Her graduate research was carried out in the laboratory of Professor Arthur Kornberg and focused on mechanisms of initiation of DNA replication. She did postdoctoral research in the laboratory of Dr. Kiyoshi Mizuuchi at the National Institutes of Health, studying the mechanism and regulation of DNA transposition. Her current research explores mechanisms and regulation of genetic recombination, enzyme-catalyzed protein unfolding, and ATP-dependent protein degradation. Professor Baker received the 2001 Eli Lilly Research Award from the American Society of Microbiology and the 2000 MIT School of Science Teaching Prize for Undergraduate Education and was elected as a fellow of the American Academy of Arts and Sciences in 2004. She is co-author (with Arthur Kornberg) of the book DNA Replication, Second Edition.

Stephen P. Bell is a Professor of Biology at the Massachusetts Institute of Technology and an Investigator of the Howard Hughes Medical Institute. He received B.A. degrees from the Department of Biochemistry, Molecular Biology, and Cell Biology and the Integrated Sciences Program at Northwestern University and a Ph.D. in biochemistry at the University of California, Berkeley in 1991. His graduate research was carried out in the laboratory of Dr. Robert Tjian and focused on eukaryotic transcription. He did postdoctoral research in the laboratory of Dr. Bruce Stillman at Cold Spring Harbor Laboratory, working on the initiation of eukaryotic DNA replication. His current research focuses on the mechanisms controlling the duplication of eukaryotic chromosomes. Professor Bell received the 2001 ASBMB–Schering Plough Scientific Achievement Award, the 1998 Everett Moore Baker Memorial Award for Excellence in Undergraduate Teaching at MIT and the 2006 MIT School of Science Teaching Award.

Alexander A. F. Gann is Editorial Director of Cold Spring Harbor Laboratory Press, and a faculty member of the Watson School of Biological Sciences at Cold Spring Harbor Laboratory. He received his B.Sc in microbiology from University College London and a Ph.D. in molecular biology from The University of Edinburgh in 1989. His graduate research was carried out in the laboratory of Noreen Murray and focused on DNA recognition by restriction enzymes. He did postdoctoral research in the laboratory of Mark Ptashne at Harvard, working on transcriptional regulation, and that of Jeremy Brockes at the Ludwig Institute of Cancer Research at University College London, where he worked on newt limb regeneration. He was a Lecturer at Lancaster University, U.K., from 1996 to 1999, before moving to Cold Spring Harbor Laboratory. He is co-author (with Mark Ptashne) of the book Genes & Signals (2002).

Michael Levine is a Professor of Molecular and Cell Biology at the University of California, Berkeley, and is also Co-Director of the Center for Integrative Genomics. He received his B.A. from the Department of Genetics at University of California, Berkeley, and his Ph.D. with Alan Garen in the Department of Molecular Biophysics and Biochemistry from Yale University in 1981. As a postdoctoral fellow with Walter Gehring and Gerry Rubin from 1982-1984, he studied the molecular genetics of Drosophila development.  Professor Levine's research group currently studies the gene networks responsible for the gastrulation of the Drosophila and Ciona (sea squirt) embryos. He holds the F. Williams Chair in Genetics and Development at University of California, Berkeley. He was awarded the Monsanto Prize in Molecular Biology from the National Academy of Sciences in 1996, and was elected to the American Academy of Arts and Sciences in 1996 and the National Academy of Sciences in 1998.

Richard M. Losick is the Maria Moors Cabot Professor of Biology, a Harvard College Professor, and a Howard Hughes Medical Institute Professor in the Faculty of Arts & Sciences at Harvard University. He received his A.B. in chemistry at Princeton University and his Ph.D. in biochemistry at the Massachusetts Institute of Technology. Upon completion of his graduate work, Professor Losick was named a Junior Fellow of the Harvard Society of Fellows when he began his studies on RNA polymerase and the regulation of gene transcription in bacteria. Professor Losick is a past Chairman of the Departments of Cellular and Developmental Biology and Molecular and Cellular Biology at Harvard University. He received the Camille and Henry Dreyfuss Teacher-Scholar Award, is a member of the National Academy of Sciences, a Fellow of the American Academy of Arts and Sciences, a Fellow of the American Association for the Advancement of Science, a Fellow of the American Academy of Microbiology, a member of the American Philosophical Society, and a former Visiting Scholar of the Phi Beta Kappa Society. Professor Losick is the 2007 winner of the Selman A. Waksman Award of the National Academy of Sciences.

2. Molecular Biology of the Gene

Descrizione libro Pearson, 2008. Condizione: Good. This is an ex-library book and may have the usual library/used-book markings inside.This book has soft covers. In good all round condition. Please note the Image in this listing is a stock photo and may not match the covers of the actual item,1900grams, ISBN:9780321507815. Codice articolo 8295348

Descrizione libro Prentice Hall, 2008. Soft cover. Condizione: Fine. 5th or later Edition. Comes with accesses code.The book looks fine, unread and clean. Edges are sharp and fine. No tears or creases. No stains, writing or reminder marks. The binding is straight and tight. Light rubbing at the corners; price intact; no interior highlights. Once your order has been confirmed and payment received, your order will then be processed. The book will be located by our staff, packaged and dispatched to you as quickly as possible. Codice articolo 016237

Descrizione libro Paperback. Condizione: Very Good. The book has been read, but is in excellent condition. Pages are intact and not marred by notes or highlighting. The spine remains undamaged. Codice articolo GOR005654690

Descrizione libro Pearson, 2007. Paperback. Condizione: Good. Good condition book. Minor Shelfwear. Good condition is defined as: a copy that has been read but remains in clean condition. All of the pages are intact and the cover is intact and the spine may show signs of wear. The book may have minor markings which are not specifically mentioned. Most items will be dispatched the same or the next working day. Codice articolo mon0014131672