Articoli correlati a Letters from London 1990-1995 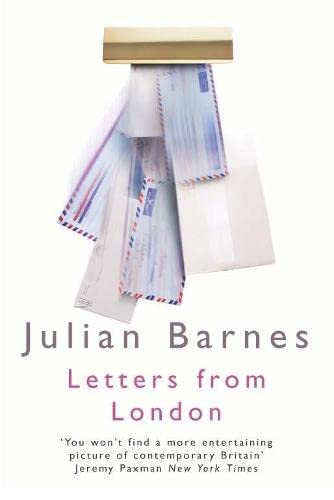 Since 1990 Julian Barnes has written a regular `Letter from London' for the New Yorker magazine. These already celebrated pieces cover subjects as diverse as the Lloyd's insurance disaster, the rise and fall of Margaret Thatcher, the troubles of the Royal Family and the hapless Nigel Short in his battle with Gary Kasparov in the 1993 World Chess Finals. With an incisive assessment of Salman Rushdie's plight and an analysis of the implications of being linked to the Continent via the Channel Tunnel, Letters from London provides a vivid and telling portrait of Britain in the Nineties.

Julian Barnes has published nine novels, Metroland, Before She Met Me, Flaubert's Parrot, Staring at the Sun, A History of the World in 10 and Half Chapters, Talking It Over, The Porcupine, England, England and Love, etc; two books of short stories, Cross Channel and The Lemon Table; and one other collections of essays, Something to Declare. His work has been translated into more than thirty languages. In France he is the only writer to have won both the Prix Midicis (for Flaubert's Parrot) and the Prix Fimina (for Talking It Over). In 1993 he was awarded the Shakespeare Prize by the FVS Foundation of Hamburg. He lives in London.