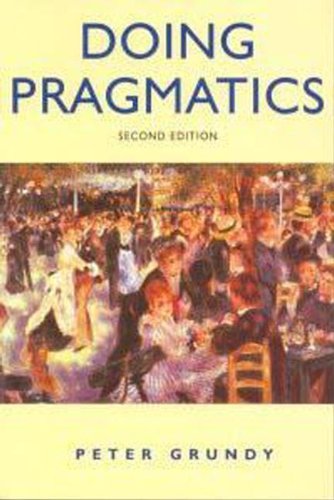 The first edition of Doing Pragmatics was written for pragmatics courses both at introductory and more advanced level, and had the advantage at the time of including a substantial practical element where other texts were only expounding dry theory.
In this new edition, Grundy consolidates the strengths of the original version. The book is restructured to reinforce its unique combination of theory and practice. Exercises that proved difficult in the first edition or are dated have been up-dated or replaced. The text is more accessible and interesting for students.
A lively and engaging introduction to the study of pragmatics, the first edition of 'Doing Pragmatics' achieved success through its unparalleled capacity to render pragmatics truly accessible to students. Embracing the comprehensive and user-friendly style which characterised the original, this new edition extends beyond theory to allow an applied understanding of empirical data and the opportunity for students to 'do' pragmatics themselves.
Beginning with an exploration of the relationship between language and context, the book then introduces the major areas of linguistic pragmatics: deixis, speech acts, Grice's theory of conversational implicature, Relevance Theory and presupposition, before expanding into wider areas: speech events, politeness phenomena, conversation and metapragmatics. Each explanation is counterbalanced with the close examination of 'live' data taken from a a variety of sources, which serves to lighten the theory and to emphasise the 'how to' application of pragmatics.
Exercises are included at regular intervals throughout chapters to confirm understanding and encourage practice of the principles learnt. The Answer Key which was printed as an appendix in the first edition, is now available at the Arnold website. Thoroughly revised and updated the new 'Doing Pragmatics' provides a solid foundation in the subject for students of linguistics and related disciplines.

In 'Doing Pragmatics' Grundy manages to come up with a fresh, strongly pedagogically orientated textbook which provides a step by step tour of the main topics of concern to pragmaticists alongside a detailed and carefully designed working plan for beginning students.
Pragmatics and Cognition

Descrizione libro Arnold, 2000. Condizione: Fair. This is an ex-library book and may have the usual library/used-book markings inside.This book has soft covers. In fair condition, suitable as a study copy. Please note the Image in this listing is a stock photo and may not match the covers of the actual item,550grams, ISBN:9780340758922. Codice articolo 8601846

Descrizione libro Paperback. Condizione: Very Good. The book has been read, but is in excellent condition. Pages are intact and not marred by notes or highlighting. The spine remains undamaged. Codice articolo GOR004276571

Descrizione libro Paperback. Condizione: Good. The book has been read but remains in clean condition. All pages are intact and the cover is intact. Some minor wear to the spine. Codice articolo GOR003384222

Descrizione libro Routledge, 2000. Paperback. Condizione: Used; Acceptable. Ex-library **Simply Brit** Shipped with Premium postal service within 24 hours from the UK with impressive delivery time. We have dispatched from our book depository; items of good condition to over ten million satisfied customers worldwide. We are committed to providing you with reliable and efficient service at all times. Codice articolo 2901498

Descrizione libro Hodder Arnold, 2000. Paperback. Condizione: Used; Good. **SHIPPED FROM UK** We believe you will be completely satisfied with our quick and reliable service. All orders are dispatched as swiftly as possible! Buy with confidence!. Codice articolo mon0001804742