Articoli correlati a The Stolen Throne 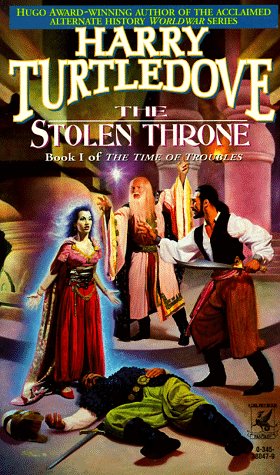 Receiving a prophetic warning just before war is declared between two rivaling empires, young Abivard watches his father and king fall in battle and a greedy bureaucrat capture the crown. Original.

ARS
An uneasy peace had prevailed these last few years between the Empire of Videssos and rival Makuran. But now Makuran's King of Kings alerted his border holdings--even the small fortress where Abivard's father was lord--to prepare for barbarian raids. But Abivard himself received a warning of a different sort: an eerie prophecy of a field, a hill, and a shield shining across the sea.
Before a season had turned, his father and his King lay dead upon the field of battle--the very place foreseen in the vision. Abivard hastened home to defend his family and his land. To his dismay, the most urgent danger came not from marauding tribes, or from Videssos, but from the capital. An obscure and greedy bureaucrat had captured the crown; the rightful heir had disappeared, and no mortal man would say where he might be found.
Abivard's strange fate would lead him to his King, though, and on through peril to the very brink of greatness--and of doom!
FIRST TIME IN PRINT

THE STOLEN THRONE (TIME OF TROUB