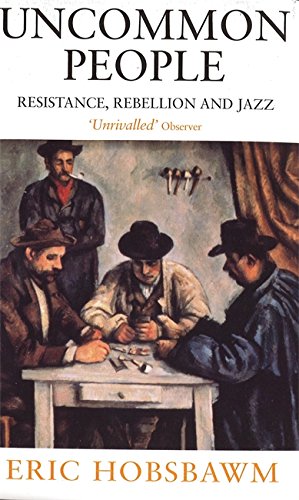 This collection of 26 essays range over the history of working men and women between the late 18th century and the present day, and brings back into print a selection of this celebrated historian's pioneering studies into labour history, together with more recent reflections previously unpublished in book form.
Eric Hobsbawm's penetrating essays on labour history and social protest opened up a new field of study and set standards of wide-ranging, evocative, incisive analysis. Essays in this collection include the formation of the British working class; labour custom and traditions; the political radicalism of 19th century shoemakers; male and female images in revolutionary movements; revolution and sex; peasants and politics; and the common-sense of Tom Paine. More recent essays include meditations on the May Day holiday; the Vietnam War; socialism and the avantgarde; Mario Puzo, the Mafia and the Sicilian bandit Salvatore Giuliano; and the cultural consequences of Christopher Columbus.
Throughout these essays runs a passionate concern for the lives and struggles of ordinary men and women - uncommon people, all of them.

Quite billiant...because he assembles his arguments with knowledge ranging across both countries and centuries, they have a rare potency (Scotsman)

Demonstrating that it is possible to be both erudite and accessible, he turns his attention to the "uncommon people" of the 18th and 19th centuries... [Hobsbawm] provides a brilliant deconstruction of the popular idea that revolution and sexual freedom are intrinsically connected. (SUNDAY TIMES)

Dump-if you have any- your preconceptions about Marxist history and buy this book. (OBSERVER)

One of the outstanding historians of our age (Independent on Sunday)

* Classic essays on the history of radical protest.