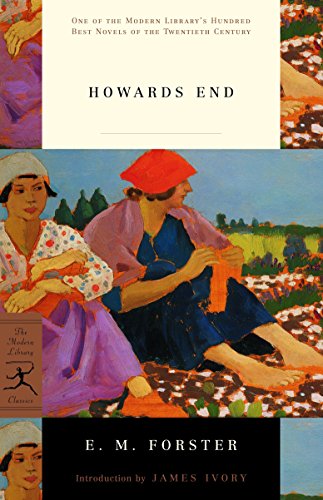 A strong-willed and intelligent woman refuses to allow the pretensions of her husband's smug English family to ruin her life. Reprint.

Howards End is a classic English novel . . . superb and wholly cherishable . . . one that admirers have no trouble reading over and over again --Alfred Kazin

Howards End is undoubtedly Forster's masterpiece; it develops to their full the themes and attitudes of [his] early books and throws back upon them a new and enhancing light --Critic Lionel Trilling

Edward Morgan Forster was born January 1, 1879 in London and was raised from infancy by his mother and paternal aunts after his father's death. Forster’s boyhood experiences at the Tonbridge School, Kent were an unpleasant contrast to the happiness he found at home, and his suffering left him with an abiding dislike of the English public school system. At King’s College, Cambridge, however he was able to pursue freely his varied interests in philosophy, literature and Mediterranean civilization, and he soon determined to devote his life to writing.

His first two novels, Where Angels Fear to Tread (1905) and The Longest Journey (1907), were both poorly received, and it was not until the publication of Howards End, in 1910, that Forster achieved his first major success as a novelist, with the work many considered his finest creation.

Forster first visited India during 1912 and 1913, and after three years as a noncombatant in Alexandria, Egypt, during World War I and several years in England, he returned for an extended visit in 1921. From those experiences came his most celebrated novel, A Passage to India, his darkest and most probing work and perhaps the best novel about India written by a foreigner.

As a man of letters , Forster was honored during and after World War II for his resistance to any and all forms of tyranny and totalitarianism, and King’s College awarded him a permanent fellowship in 1949. Forster spent his later years at Cambridge writing and teaching, and died at Coventry, England, on June 7, 1970. His novel, Maurice, written several decades earlier, was published posthumously in 1971.

Descrizione libro Paperback. Condizione: New. Reprint. Language: English. Brand new Book. First published in 1910, Howards End is the novel that earned E. M. Forster recognition as a major writer. Soon to be a limited series on Starz. At its heart lie two families--the wealthy and business-minded Wilcoxes and the cultured and idealistic Schlegels. When the beautiful and independent Helen Schlegel begins an impetuous affair with the ardent Paul Wilcox, a series of events is sparked--some very funny, some very tragic--that results in a dispute over who will inherit Howards End, the Wilcoxes' charming country home. As much about the clash between individual wills as the clash between the sexes and the classes, Howards End is a novel whose central tenet, Only connect, remains a powerful prescription for modern life. Introduction by Alfred Kazan(Book Jacket Status: Not Jacketed). Codice articolo BZE9780375753763