Articoli correlati a All the Earth, Thrown to the Sky

Lansdale, Joe R. All the Earth, Thrown to the Sky

All the Earth, Thrown to the Sky 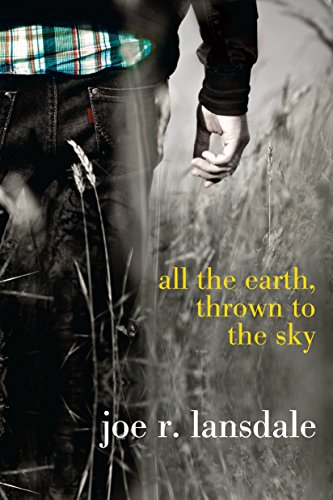 Jack Catcher's parents are dead--his mom died of a sickness and his dad of a broken heart--and he wants to get out of Oklahoma, where dust storms have killed everything green and hopeful. So when former classmate Jane Lewis and her little brother, Tony, show up in his yard with plans to steal a dead neighbor's car and make a break for Texas, Jack doesn't need much convincing to go with them. But a run-in with one of the era's most notorious gangsters puts a crimp in Jane's plan, and soon the three kids are riding the rails among hoboes, gangsters, and con men, racing to warn a carnival-wrestler-turned-bank-robber of the danger headed toward him faster than a black blizzard on the prairie horizon. This road trip adventure is a colorful ride through Depression-era America.

JOE R. LANSDALE is the author of more than a dozen novels for adults, including eight Hap and Leonard novels, as well as Sunset and Sawdust and Lost Echoes. He has received a British Fantasy Award, an American Mystery Award, an Edgar Award, a Grinzane Cavour Prize, and seven Bram Stoker Awards. All the Earth, Thrown to the Sky is his first novel for young adults.

The wind could blow down a full-grown man, but it was the dust that was the worst. If the dust was red, I could figure it was out of Oklahoma, where we were. But if it was white, it was part of Texas come to fall on us, and if it was darker, it was probably peppering down from Kansas or Nebraska.

Mama always claimed you could see the face of the devil in them sandstorms, you looked hard enough. I don't know about that, it being the devil and all. But I can tell you for sure there were times when the sand seemed to have shape, and I thought maybe I could see a face in it, and it was a mean face, and it was a face that had come to puff up and blow us away.

It might as well have been the devil, though. In a way, it had blowed Mama and Daddy away, 'cause one night, all the dust in her lungs--the dirty pneumonia, the doctor had called it--finally clogged up good and she couldn't breathe and there wasn't a thing we could do about it. Before morning she was dead. I finally fell asleep in a chair by her bed holding her cold hand, listening to the wind outside.

When I went to look for Daddy, I found him out in the barn. He'd hung himself from a rafter with a plowline from the old mule harness. He had a note pinned to his shirt that said: I CAN NOT TAKE IT WITH YOUR MAMA DEAD I LOVE YOU AND I AM SORRY. It was not a long note, but it was clear, and even without the note, I'd have got the message.

It hadn't been long since he done it, because there was still a slight swing to his body and his shadow waved back and forth across the floor and his body was still warm.

I got up on the old milking stool and cut him down with my pocketknife, my hand trembling all the while I done it. I went inside and got Mama, managed to carry her down the porch and lay her on an old tarp and tug her out to the barn. Then the sandstorm came again, like it was just waiting on me to get inside. It was slamming the boards on the outside of the barn all the time I dug. The sky turned dark as the inside of a cow even though it was midday. I lit a lantern and dug by that light. The floor of the barn was dirt and it was packed down hard and tight from when we still had animals walking around on it.

I had to work pretty hard at digging until the ground got cracked and I was down a few inches. Then it was soft earth, and I was able to dig quicker. Digging was all I let myself think about, because if I stopped to think about how the only family I had was going down into a hole, I don't know I could have done it.

I wrapped Mama and Daddy in the tarp and dragged them into the hole, side by side, gentle as I could. I started covering them up, but all of a sudden, I was as weak as a newborn kitten. I sat down on the side of the grave and looked at their shapes under the tarp. I can't tell you how empty I felt. I even thought about taking that plowline and doing to myself what Daddy had done.

But I didn't want to be like that. I wanted to be like the heroes in books I had read about, who could stand up against anything and keep on coming. I hated to say it about my Daddy, but he had taken the coward's way out, and I hadn't never been no coward and wasn't about to start. Still, I broke down and started crying, and I couldn't stop, though there didn't seem to be much wet in me. The world was dry, and so was I, and all the time I cried I heaved, like someone sick with nothing left inside to throw up.

The storm howled and rattled the boards in the barn. The sand drifted through the cracks and filled the air like a fine powder and the powder was the color of blood. It was Oklahoma soil that was killing us that day, and not no other. In an odd way I found that worse. It seemed more personal than dirt from Texas, Kansas, or the wilds of Nebraska.

The lantern light made the powder gleam. I sat there and stared at the blood-colored mist and finally got up the strength to stand and finish covering Mama and Daddy, mashing the dirt down tight and flat with the back of the shovel when I was done.

I started to say some words over them, but the truth was I wasn't feeling all that religious right then, so I didn't say nothing but "I love you two. But you shouldn't have gone and killed yourself, Daddy. That wasn't any kind of way to do."

I got the lantern and set it by the door, pulled some goggles off a nail and slipped them on. They had belonged to my granddaddy, who had been an aviator in World War I, and though I hadn't knowed him very well before he died, he had left them to me, and it was a good thing, 'cause I knowed a couple fellas that got their eyes scraped off by blowing sand and gone plumb blind.

I put the goggles on, blew out the lantern. Wasn't no use trying to carry it out there in the dark, 'cause the wind would blow it out. I set it down on the floor again, opened up the barn door, got hold of the rope Daddy had tied to a nail outside, and followed it through the dark with the wind blowing that sand and it scraping me like the dry tongue of a cat. I followed it over to where it was tied to the porch of the house, and then when I let go of it, I had to feel my way around until I got hold of the doorknob and pushed myself inside.

I remember thinking right then that things couldn't get no worse.

But I was wrong.
From the Hardcover edition.

1. All the Earth, Thrown to the Sky

2. All the Earth, Thrown to the Sky

3. All the Earth, Thrown to the Sky

4. All the Earth, Thrown to the Sky

5. All the Earth, Thrown to the Sky

6. All the Earth, Thrown to the Sky

7. ALL THE EARTH, THROWN TO THE SKY

8. ALL THE EARTH, THROWN TO THE SKY