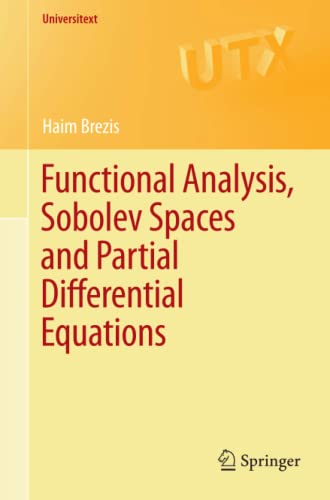 This is a completely revised English edition of the important Analyse fonctionnelle (1983). It contains a wealth of problems and exercises to guide the reader. It is also the first single-volume textbook to cover related fields of functional analysis and PDEs.

“Brezis has intelligently chosen several fundamental concepts of functional analysis, and has build the book around them and their applications. ... for a newcomer who intends to become a user of functional analysis this book is an ideal place to start. In fact I would recommend this over any other source to any beginning graduate student. ... the book also has all the basic tools for a beginer PDE researcher ... . Its a bible for the field of research.” (Philosophy, Religion and Science Book Reviews, bookinspections.wordpress.com, October, 2013)

“This textbook has its origin in the French version Analyse fonctionnelle published in 1985, which has become a standard reference and was translated into several languages. ... At the end of each chapter the reader will find comments with further information, references, and historic remarks. ... In summary, the present textbook provides an excellent basis for a course on functional analysis plus a follow-up course on partial differential equations. It is well-written and I can wholeheartedly recommend it to both students and teachers.” (G. Teschl, Monatshefte für Mathematik, Vol. 165 (3-4), March, 2012)

“This book is a tour de force by the author, who is a master of modern nonlinear functional analysis and who has contributed extensively to the development of the theory of partial differential equations. ... The writing is lively, the material is diverse and maintains a strong unity. ... the book is a very useful contribution to the growing literature on this circle of ideas. I wholeheartedly recommend this book both as a textbook, as well as for independent study.” (Vicenţiu Rădulescu, Mathematical Reviews, Issue 2012 a)

“The book is the English translation of an 1983 book published in French: Analyse fonctionnelle :théorie et applications ... . It has seen translations into numerous languages and the Springer edition was especially anticipated, as it announced a number of practice exercises following each chapter. I can honestly say that it was well worth the wait. ... The text is a pleasure to read. ... I wholeheartedly recommend this book as both a textbook as well as for independent study.” (Florin Catrina, The Mathematical Association of America, June, 2011)

Uniquely, this book presents a coherent, concise and unified way of combining elements from two distinct “worlds,” functional analysis (FA) and partial differential equations (PDEs), and is intended for students who have a good background in real analysis. This text presents a smooth transition from FA to PDEs by analyzing in great detail the simple case of one-dimensional PDEs (i.e., ODEs), a more manageable approach for the beginner. Although there are many books on functional analysis and many on PDEs, this is the first to cover both of these closely connected topics. Moreover, the wealth of exercises and additional material presented, leads the reader to the frontier of research.This book has its roots in a celebrated course taught by the author for many years and is a completely revised, updated, and expanded English edition of the important “Analyse Fonctionnelle” (1983). Since the French book was first published, it has been translated into Spanish, Italian, Japanese, Korean, Romanian, Greek and Chinese. The English version is a welcome addition to this list.The first part of the text deals with abstract results in FA and operator theory. The second part is concerned with the study of spaces of functions (of one or more real variables) having specific differentiability properties, e.g., the celebrated Sobolev spaces, which lie at the heart of the modern theory of PDEs. The Sobolev spaces occur in a wide range of questions, both in pure and applied mathematics, appearing in linear and nonlinear PDEs which arise, for example, in differential geometry, harmonic analysis, engineering, mechanics, physics etc. and belong in the toolbox of any graduate student studying analysis.

Descrizione libro Springer-Verlag New York Inc., United States, 2010. Paperback. Condizione: New. 2011. Language: English. Brand new Book. This textbook is a completely revised, updated, and expanded English edition of the important Analyse fonctionnelle (1983). In addition, it contains a wealth of problems and exercises (with solutions) to guide the reader. Uniquely, this book presents in a coherent, concise and unified way the main results from functional analysis together with the main results from the theory of partial differential equations (PDEs). Although there are many books on functional analysis and many on PDEs, this is the first to cover both of these closely connected topics. Since the French book was first published, it has been translated into Spanish, Italian, Japanese, Korean, Romanian, Greek and Chinese. The English edition makes a welcome addition to this list. Codice articolo SPR9780387709130