Articoli correlati a Selected Papers and Other Writings

Selected Papers and Other Writings 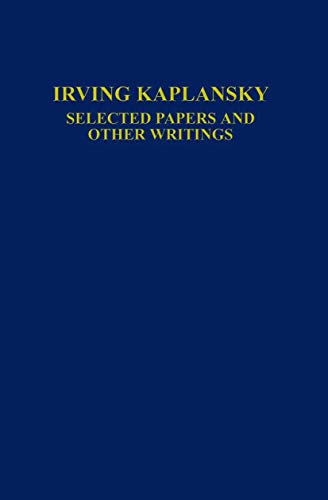 It is not often that one gets to write a preface to a collection of one's own papers. The most urgent task is to thank the people who made this book possible. That means first of all Hy Bass who, on behalf of Springer-Verlag, approached me about the idea. The late Walter Kaufmann-Biihler was very encouraging; Paulo Ribenboim helped in an important way; and Ina Lindemann saw the project through with tact and skill that I deeply appreciate. My wishes have been indulged in two ways. First, I was allowed to follow up each selected paper with an afterthought. Back in my student days I became aware of the Gesammelte Mathematische Werke of Dedekind, edited by Fricke, Noether, and Ore. I was impressed by the editors' notes that followed most of the papers and found them very usefuL A more direct model was furnished by the collected papers of Lars Ahlfors, in which the author himself supplied afterthoughts for each paper or group of papers. These were tough acts to follow, but I hope that some readers will find at least some of my afterthoughts interesting. Second, I was permitted to add eight previously unpublished items. My model here, to a certain extent, was the charming little book, A Mathematician's Miscel­ lany by J. E. Littlewood. In picking these eight I had quite a selection to make -from fourteen loose-leaf notebooks of such writings. Here again I hope that at least some will be found to be of interest.

“Kaplansky’s Selected Papers and Other Writings was originally published in 1995. The selection was presumably made by Kaplansky, who also adds ‘afterthoughts’ to each of the papers. ... this volume is especially attractive. Kaplansky writes very well, and as a result many of these papers are easy to read. ... readable by undergraduates and could serve as the seed of interesting research projects. And several of the papers are classics.” (Fernando Q. Gouvêa, MAA Reviews, December, 2013) Contenuti: