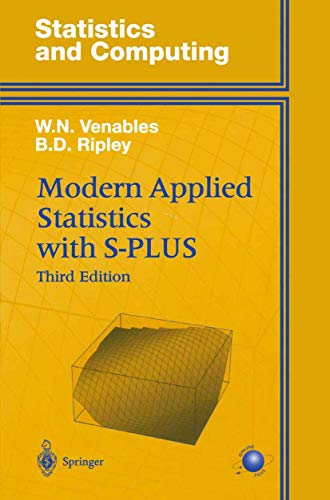 S-PLUS is a powerful environment for the statistical and graphical analysis of data. It provides the tools to implement many statistical ideas that have been made possible by the widespread availability of workstations having good graphics and computational capabilities. This book is a guide to using S-PLUS to perform statistical analyses and provides both an introduction to the use of S-PLUS and a course in modern statistical methods. S-PLUS is available commercially for both Windows and UNIX workstations, and both versions are covered in depth. The aim of the book is to show how to use S-PLUS as a powerful and graphical data analysis system. Readers are assumed to have a basic grounding in statistics, and so the book is intended for would-be users of S-PLUS, and both students and researchers using statistics. Throughout, the emphasis is on presenting practical problems and full analyses of real data sets. Many of the methods discussed are state-of-the-art approaches to topics such as linear, non-linear, and smooth regression models, tree-based methods, multivariate analysis and pattern recognition, survival analysis, time series and spatial statistics. Throughout, modern techniques such as robust methods, non-parametric smoothing and bootstrapping are used where appropriate. This third edition is intended for users of S-PLUS 4.5, 5.0 or later, although S-PLUS 3.3/4 are also considered. The major change from the second edition is coverage of the current versions of S-PLUS. The material has been extensively rewritten using new examples and the latest computationally-intensive methods. Volume 2: S programming, which is in preparation, will provide an in-depth guide for those writing software in the S language.