Articoli correlati a An Alphabet: Short Stories for All the Letters

Jeffers, Oliver An Alphabet: Short Stories for All the Letters

An Alphabet: Short Stories for All the Letters 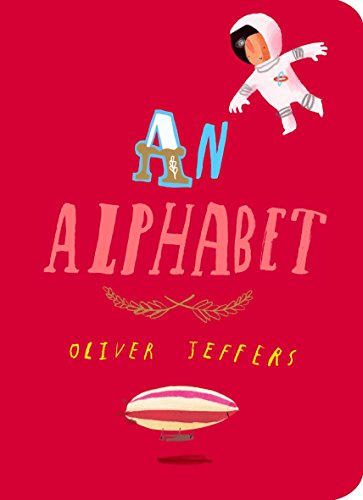 A wryly whimsical alphabet primer reinforces letter-recognition skills by introducing an Astronaut who is afraid of heights, a Bridge that ends up burned between friends and a Cup that is stuck in a cupboard. By the award-winning creator of The Day the Crayons Quit.

Praise for ONCE UPON AN ALPHABET:

A Publishers Weekly Best Book of the Year!

A School Library Journal Best Book of the Year!

* "With wry humor, equally droll ink illustrations, and a solid dose of alliteration, Jeffers creates delightful mini-narratives for each letter of the alphabet."–Publishers Weekly, starred review

"Jeffers knows how to catch the attention of his young audience while challenging their imagination, intellect and vocabulary. This whimsical exploration of letters and language begs to be read over and over again."–BookPage

"Handsome, humorous and clad in bright tomato-red, [this] is the sort of book you may want to rush into the arms of imaginative, good-natured children between 4 and 10 years old. [T]his is no traditional abecedarian exercise.The stories are wonderfully varied, sometimes philosophical and often end surprisingly; the drawings are just as quirky and unpredictable."–The Wall Street Journal

"[W]itty from A to Z . . . no one would blame you for having a copy even if there are no kids in the house. Think of it as Edward Gorey for the preschool set — and their hip parents."–The Washington Post

"Jeffers knows how to catch the attention of his young audience while challenging their imagination, intellect and vocabulary. This whimsical exploration of letters and language begs to be read over and over again."--Book Page
From the Hardcover edition. L'autore:

Oliver Jeffers (www.oliverjeffersworld.com) makes art and tells stories. In addition to illustrating The Day the Crayons Quit, his books include How to Catch a Star; Lost and Found, which was the recipient of the prestigious Nestle Children’s Book Prize Gold Award in the U.K. and was later adapted into an award-winning animated film; The Way Back Home; The Incredible Book Eating Boy; The Great Paper Caper; The Heart and the Bottle, which was made into a highly acclaimed iPad application narrated by Helena Bonham Carter; Up and Down, the New York Times bestselling Stuck; The Hueys in the New Sweater, a New York Times Best Illustrated Book of the Year; and This Moose Belongs to Me, a New York Times bestseller. Originally from Belfast, Northern Ireland, Oliver now lives and works in Brooklyn, New York. Follow Oliver @OliverJeffers.

1. An Alphabet (Board Book)

2. Alphabet : Short Stories for All the Letters