Articoli correlati a Plays Two (2): The Misfits / After the Fall / Incident...

Miller, Arthur Plays Two (2): The Misfits / After the Fall / Incident at Vichy / The Price / The Creation of the World and Other Business / Playing for Time

Plays Two (2): The Misfits / After the Fall / Incident at Vichy / The Price / The Creation of the World and Other Business / Playing for Time 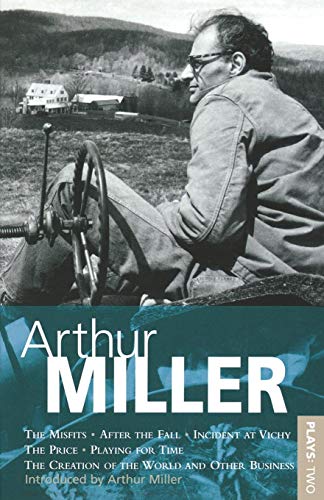 This second volume of Arthur Miller's plays contains four stage plays from the sixties and seventies, taking up the theme of individual responsibility from his earlier work. Two of these acclaimed plays are The Price (1968) 'a beautifully intelligent play about two brothers who are pinned in positions of flight from their own histories that are as fruitless as the movements of the men at Pompeii...For Miller, heroism lies on the scale of a man's sense of the possibility of controlling his own life' (Observer) and After the Fall 'about how we - nations and individuals - destroy ourselves by denying that this is precisely what we are doing'. Incident at Vichy (1964) is 'a short but intense drama of Occupied France...a kind of suspense thriller with moral overtones, continuously absorbing' (New York Post). Also included are two of his screenplays: The Misfits, written for and filmed with Marilyn Monroe, and Playing for Time, televised with Vanessa Redgrave. The volume is introduced by the author. "The greatest American dramatist of our age" (Evening Standard)