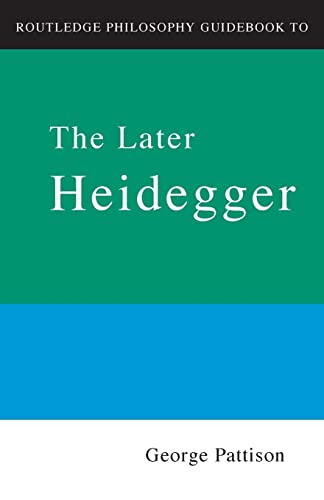 Martin Heidegger is one of the most controversial thinkers of the twentieth century. His writings are notoriously difficult: they both require and reward careful reading.
The Later Heidegger introduces and accesses:
* Heidegger's life and the background to his later works
* The ideas and texts of some of his influential later works, including The Question concerning Technology, The Origin of the Work of Art, and What is Called Thinking?
* Heidegger's continuing importance to philosophy and contemporary thought.

This text aims to guide the reader through the complexities of Heidegger's later works. The book offers an introduction to the main themes that preoccupied Heidegger in the second part of his career: technology; Art; the history of philosophy; and the exploration of a new post-technological way of thinking. The author explores many aspects of Heidegger's later life and work, including the massive controversy surrounding his Nazism, as well as his readings of Neitzsche, the Presocratics and Holderlin. He also assesses the difficult nature of Heidegger's thought and its significance for philosophy today.