Articoli correlati a Geographies of Globalization 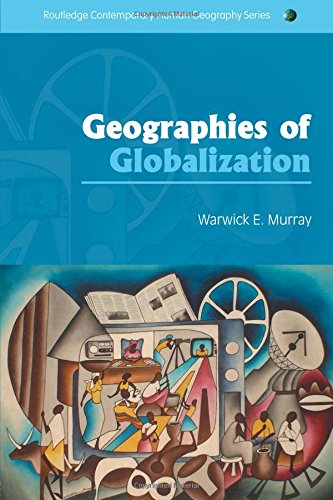 This informative text offers a geographical perspective on globalization. It provides a lively exploration of its spatial impacts and the distinctive contribution of human geography to studies and debates in this field. Fully up-to-date and engaging, this work:

Throughout, boxed sections highlight and clearly explain 'key concepts' and showcase classic and innovative work. Highly illustrated with figures, photographs and maps, this book also includes chapter summaries and annotated further reading. It will be indispensable for human geography, sociology, political science and development studies undergraduates and postgraduates studying the phenomenon on both dedicated and linked courses.

'The book is very well written, carrying the reader along with all the zest and enthusiasm that characterise a winner of one of the 2006 national tertiary teaching awards. Reading it often seems like being in a high-energy classroom.' - New Zealand Journal of Social Sciences

'A valid contribution to the globalisation literature as an introductory level or foundation text, combining key themes and empirical case studies with some key theoretical ideas. As part of the Routledge Contemporary Human Geography Series the book serves its role as a teaching aid, providing a concise introduction to the subject while is also amenable to delivery as, or as an accompaniment to, an undergraduate lecture courses.'- Tim Vorley, University of Leicester

'The structure of the book is logical and captures the key themes associated with globalisation, and is very accessible and extremely student friendly. It's an excellent book.' - Tim Vorley, University of Leicester

'Geographies of Globalisation is written in a very clear, accessible and concise manner and is a book that offers students something of a route-map through the uncertainty, confusion and misunderstandings that surround this now widely debated phenomenon.' - New Zealand Geographer 2006

'This book will travel well beyond the discipline of geography and will be equally useful for students of a range of other social science disciplines.' - Marcus Power, Department of Geography, University of Durham

'Geographies of Globalization is a must read. It offers reasons why geographers have been marginal to the wider globalization debates, an agenda for rectifying this issue, and a call to arms to geographers on how to make their discipline distinct and valuable to the debates.' - Canadian Geographer Review

Warwick Murray is professor of human geography and development studies at Victoria University of Wellington, New Zealand. He has held University positions in the UK and Fiji and has been a visiting professor at universities in Europe and South America. He is president of the Australasian Iberian and Latin American Studies Association. He is has served as editor on a number of journals including Asia Pacific Viewpoint and Journal of Rural Studies. Much of his published research has focused on Latin America, the Pacific and the Asia Pacific region as well as Australia, New Zealand the UK. He has won national awards for his teaching, including the Prime Minsters award for excellence in tertiary teaching in New Zealand.

John Overton is professor of development studies and human geography at Victoria University of Wellington, New Zealand. He has held university positions at four other institutions including the Australian National University. He is current President of the New Zealand Geographical Society and former Director of the Commonwealth Geographical Bureau. He has served as an editor for a range of journals including Asia Pacific Viewpoint. He has undertaken and published research in Africa, Southeast Asia, Australia, New Zealand and the Pacific region. He has supervised over 150 postgraduate students to successful completion.