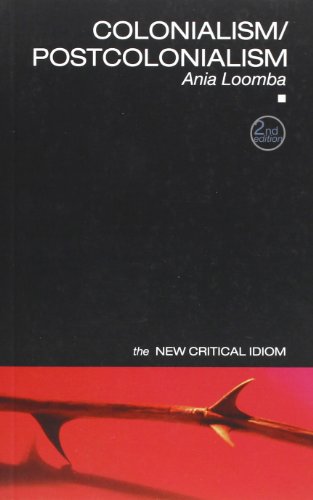 Colonialism/Postcolonialism is a comprehensive yet accessible guide to the historical and theoretical dimensions of colonial and postcolonial studies.

Recommended on courses across the academic disciplines and around the world, Colonialism/Postcolonialism has for some years been accepted as the essential introduction to a vibrant and politically charged area of literary and cultural study.

With new coverage of emerging debates around globalization, this second edition will continue to serve as the ideal guide for students new to colonial discourse theory, postcolonial studies or postcolonial theory as well as a reference for advanced students and teachers.

'Colonialism/Postcolonialism is both a crystal-clear and authoritative introduction to the field and a cogently-argued defence of the field's radical potential. It's exactly the sort of book teachers want their students to read.' – Peter Hulme, Department of Literature, Film and Theatre Studies, University of Essex, UK

'Loomba is a keen and canny critic of ever-shifting geopolitical realities, and Colonialism/Postcolonialism remains a primer for the academic and common reader alike.' – Antoinette Burton, Department of History, University of Illinois, USA

'It is rare to come across a book that can engage both student and specialist. Loomba simultaneously maps a field and contributes provocatively to key debates within it. Situated comparatively across disciplines and cultural contexts, this book is essential reading for anyone with an interest in postcolonial studies.' – Priyamvada Gopal, Faculty of English, Cambridge University, USA

'Colonialism/Postcolonialism moves adroitly between the general and the particular, the conceptual and the contextual, the local and the global, and between texts and material processes. Distrustful of established and self-perpetuating assumptions, foci and canonical texts which threaten to fossilize postcolonial studies as a discipline, Loomba's magisterial study raises many crucial issues pertaining to social structure and identity; engaging with different modes of theory and social explanation in the process. There is no doubt that this book remains the best general introduction to the field.' – Kelwyn Sole Professor, English Department, University of Cape Town

'Lucid and incisive this is a wonderful introduction to the contentious yet vibrant field of post-colonial studies. With consummate ease Loomba maps the field, unravels the many strands of the debate and provides a considered critique. She shows how post colonial theory forces us to reconsider some of our founding ideas, reorient our frames of enquiry, and rethink the very notion of colonialism. A must-read for everyone.' – Neeladri Bhattacharya, Jawaharlal Nehru University, India

Ania Loomba is Catherine Bryson Professor of English at the University of Pennsylvania. Her recent publications include Shakespeare, Race and Colonialism (2002) and Postcolonial Shakespeares (1998; co-edited with Martin Orkin). She has published widely in the fields of postcolonial studies, South Asian writing, Shakespeare and early modern literature.