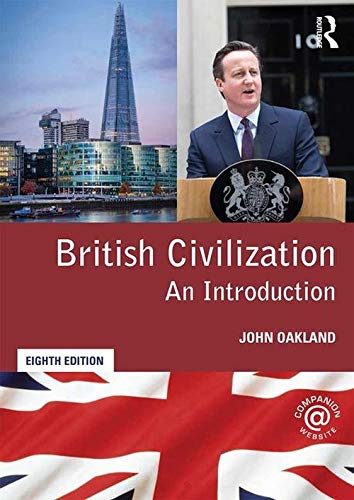 The eighth edition of this highly-praised textbook has been substantially updated and revised to provide students of British studies with the perfect introduction to Britain, its country and people, politics and government, education, economy, media, arts and religion. It includes:

Supported by a fully updated companion website (found at www.routledge.com/cw/oakland) featuring further exercises, quiz questions, an interactive timeline, links to relevant articles and videos online and tutor guidance, British Civilization is a vital introduction to the crucial and complex identities of Britain past and present.

"Oakland has produced an accessible and comprehensive introduction to British culture and society maintaining clarity and focus while looking at issues in sufficient depth and detail. The book is well supported with a dedicated website for students and tutors offering links for future research and self-assessment."

"The neatly updated eighth edition of John Oakland's British Civilization is probably the best and most comprehensive institution-based introduction to contemporary Britain, and is simply indispensable in the classroom."

"This most readable book focusing on various aspects of contemporary British society is absolutely indispensable for international students, both in Britain and abroad, who seek a deeper understanding of British history, life and institutions."

"Comprehensive and brilliantly structured, British Civilization has helped my successive undergraduate classes get a clear and thorough introduction to the different aspects of British society. This revised and updated eighth edition is undeniably highly valuable course material for foreign students of British Studies."

Praise for the previous edition:

"This is an excellent core course book, suitable for both native and non-native speakers of English alike. It is well written and provides up-to-date coverage of a wide range of topics."

"The balance between the width and depth of Civilization analysis makes this an excellent textbook for students at the introductory level of the field. John Oakland covers a wide range of topics without becoming bogged down in details and while preserving the complexities of British Civilization issues and debates."

"Oakland’s British Civilization not only provides an historical overview, but also an in-depth insight into the issues and debates encountered when studying Britain, its institutions and people. For those who are fascinated by Britain, this is a book not to be missed; for those who aren’t, this book will certainly change your mind."

"A highly-readable exploration of British culture, media and the arts. The updated edition examines areas other books on the subject fail to address and the exercises at the end of each chapter are current and thought-provoking. This would be a valuable addition to the bookshelf for all undergraduates of the field."

John Oakland is former Senior Lecturer in English at the Norwegian University of Science and Technology and the author (with David Mauk) of American Civilization (2013, now in its sixth edition), Irish Civilization (2012, with Arthur Aughey), British Civilization: A Student’s Dictionary (2003, in its second edition), and Contemporary Britain (2001).

Descrizione libro Routledge, 2015. Paperback. Condizione: Used; Very Good. Dispatched, from the UK, within 48 hours of ordering. Though second-hand, the book is still in very good shape. Minimal signs of usage may include very minor creasing on the cover or on the spine. Damaged cover. The cover of is slightly damaged for instance a torn or bent corner. Codice articolo CHL6381180

Descrizione libro Routledge 2015-12-22, 2015. Paperback. Condizione: Very Good. Item is in very good condition. If supplemental codes/CDs for textbooks are required please contact us prior to purchasing as they may be missing. Photos are stock pictures and not of the actual item. Codice articolo DS-0415746892-2