Articoli correlati a Colonial Conscripts: The Tirailleurs Senegalais in... 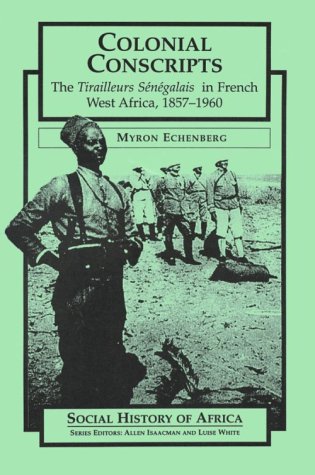 In Colonial Conscripts, Myron Echenberg traces the social history of a large and diverse group of West Africans who served in Senegalese regiments of the French colonial army. Examining both how the soldiers and veterans lived out their lives in service and how the military institution functioned, Dr Echenberg also reviews the African military within a framework bounded by such issues as labor, migration, and demography. The main focus is on how rank-and-file African soldiers, officers, and veterans responded to their ambiguous and often contradictory position within the colonial social formation.

MYRON ECHENBERG is an associate professor at McGill University, where he teaches African history. He was for several years the co-editor of the Canadian Journal of African Studies and has published numerous articles dealing with French-speaking West Africa. His Colonial Conscripts: the Tirailleurs Senegalais in French West Africa, 1857-1960 won the Herskovits Award of the African Studies Association for the outstanding original scholarly work published during 1991.