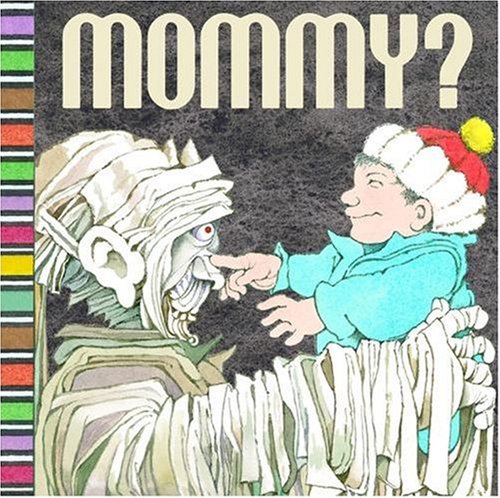 When a little boy stumbles into a house to find his mother, he gets the surprise of his life when he finds a collection of monsters, including a vampire, mummy, and werewolf, in a slightly spooky holiday tale with pop-ups on every spread engineered by Matthew Reinhart. $350,000 ad/promo.

PW Starred
Children who get the better of monsters are a Sendak specialty, fromWhere the Wild Things Are toBrundibar . In this light bite of spine-tingling fare created by Sendak, Yorinks (Hey, Al ) and Reinhart (Encyclopedia Prehistorica )-sort of a dark twist onAre You My Mother- -a mischievous boy addresses the title question to some unmaternal characters. Sendak's quintessential black-haired boy (with a strong resemblance to Mickey), wearing blue PJs and a red cap, wanders into a haunted house and naively calls, "Mommy-" Stylized, softened characters fromNosferatu and Lon Chaney creature features unfold in 3-D to menace the child, but the boy might as well be saying, "Trick or treat-", because he pulls pranks on everyone. A tall Frankenstein's monster gets ready to stomp on him; in a gatefold at the right-hand side of the spread, the disarming toddler jerks the bolts from the startled monster's neck. On a brick roof, the boy surprises a werewolf and a green goblin; the gatefold reveals the boy yanking down the Wolf Man's jeans to reveal silly boxer shorts, while the goblin giggles. In Reinhart's neatest engineering feat-a spinning dowel-and-string contraption-the not-so-harmless boy spins the white wrappings off an Egyptian "mummy." The title is the book's only word until the conclusion, when the Bride of Frankenstein at last replies to the child's question. Although the illustrious creators' do not appear until the back cover, readers cannot miss Sendak's signature graphic style. These gags are not too serious, but the suspenseful setups pointedly suggest humor's power over fear. All ages.(Sept.)

Kirkus Starred
Sendak's first foray into the world of pop-up books is a brilliant success. After Yorinks sets up
the Are You My Mother? theme with a twist, Sendak makes it his own, and Reinhardt adds the
surprises as a little Mickey-like boy moves through a haunted house, from monster to monster, looking
for his mother. None of the ghouls stands a chance against the mischievous tyke, as he unscrews
Frankenstein's monster's bolts, pulls down the werewolf's pants and spins the Mummy in its own
wrapping. This last action makes the most effective use of the pop-up possibilities: When the gatefold
is opened, the creature actually spins on a dowel pulled by the boy. The combined talent of Sendak,
Yorinks and Reinhardt offers some of the best art and artistry in the genre: As each page is opened,
the spread is filled with multiple pop-ups of everything from a bag of hands” to a snake poking out
of a basket, as well as a side gatefold, also a pop-up, illustrating each monster's undoing. The text is
only one word Mommy?” until she is found in a surprise ending and answers you guessed it
B-A-B-Y!” Readers will answer, AGAIN!” (Pop-up. All ages)

Booklist
Gr. 1 3. As suggested by the author credit, Scenario by Arthur Yorinks,” Sendak's first pop-up book is more situation than story, but it's a situation well matched to the artist's cherished themes and darkest sensibilities. The mostly wordless tale features a pajama-clad toddler, who seeks his mother in a graveyard crypt (the titular query, set within speech balloons, comprises most of the text), encountering a series of Halloween-themed Wild Things along the way. The ambiguous ending, suggesting either a joyful reunion or an imminent babynapping by a zombielike Bride of Frankenstein, is as twisted, in its way, as the crying pig trussed up beneath a staircase on the first spread a perverse, mostly hidden detail that will either horrify or amuse those who discover it. Although contributions by paper engineer Matthew Reinhardt offer some whimsical moments, Sendak's staunchest fans may object to the way the mechanics fracture the artwork, compromising their idol's sure lines and celebrated design sense. Still, the combination of a legendary ill

Matthew Reinhart is a renowned paper engineer and bona fide STARS WARS aficionado. He created the NEW YORK TIMES bestselling STAR WARS: A POP-UP GUIDE TO THE GALAXY with Lucasfilm, published by Orchard Books. He also created DC SUPER HEROES: THE ULTIMATE POP-UP BOOK and MOMMY? by Maurice Sendak. He has worked with Robert Sabuda on many fantastic pop-up titles such as THE WONDERFUL WIZARD OF OZ; ABC DISNEY; the Encyclopedia Mythologica trilogy; and the Encyclopedia Prehistorica trilogy. He lives in New York City.