Articoli correlati a Gai-Jin: The Epic Novel of the Birth of Modern Japan:...

Clavell, James Gai-Jin: The Epic Novel of the Birth of Modern Japan: A Novel of Japan

Gai-Jin: The Epic Novel of the Birth of Modern Japan: A Novel of Japan 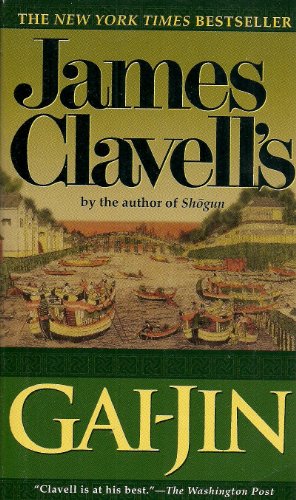 In the Japan of the 1860s, Malcolm Struan, the heir to the title of Tai-Pan within the Nobel House, meets a young French woman who will alter his destiny and the entire family legacy. Reprint.

“With great skill and intelligence...Gai-Jin is just the ticket. It has it all: murders, battles, rapes, earthquakes, sword fights, insanely convoluted political intrigues, and innumerable accounts of ‘pillowing’ with beautiful women.”—San Francisco Chronicle

“Engrossing...entertaining...the broad portrait is accurate and as colorful as an ancient Kabuki play.”—People


From the Trade Paperback edition.

James Clavell, who died in 1994, was a screenwriter, director, producer, and novelist born in Sydney, New South Wales, Australia. Although he wrote the screenplays for a number of acclaimed films, including The Fly (1958), The Great Escape (1963), and To Sir With Love (1967), he is best known for his epic novels in his Asian Saga.
From the Trade Paperback edition.

Descrizione libro Condizione: New. Grand in scope and scale, filled with the richness and passion of two great histories coming together, "Gai-jin" is the long-awaited sixth novel in James Clavell's magnificent Asian Saga. Sweeping us back to the enigmatic and elusive land of his best-selling "Shogun", he weaves an extraordinary tale of Japan, now newly open to gai-jin foreigners and teeming with contradictions as the ancient and the modern meet in a clash of cultures, of nations, of generations. It is 1862, and in Japan's Foreign Settlement of Yokohama, reverberations from an explosive act of violence will forever alter and connect the lives of the major characters. Malcolm Struan, at twenty, is heir to the title of tai-pan of the most powerful and bitterly contested English trading company in the Orient, the Noble House. Malcolm's fate, and that of his family's legacy, become inextricably intertwined with that of a beautiful young French woman, Angelique Richaud. Desired by many, loved purely and passionately by Malcolm, Angelique will hold the future of the Noble House in her hands. Intricately interwoven into the story of the struggle for control of the Noble House is a powerful parallel story of the Land of the Gods, Japan, a country ripped apart by greed, idealism, and terrorism as groups of young xenophobic revolutionaries, ronin, attempt to seize the Shogunate and expel the hated gai-jin from Japan. One man, Lord Toranaga Yoshi, a direct descendant of the first Toranaga Shogun, attempts not only to protect the Shogunate, but to usher it, and Japan, into the modern age. Amid the brutality and heroism, the betrayals and the stunning romance, a multilayered, complex story unfolds. Here the dark and erotic world of the pleasure houses the Ladies of the Willow World, spies, and terrorists meets the world of pageantry and power monarchs and diplomats. And here East meets West in an inevitable collision of two equally powerful cultures. Codice articolo 9780440216803