Articoli correlati a The Golden Compass 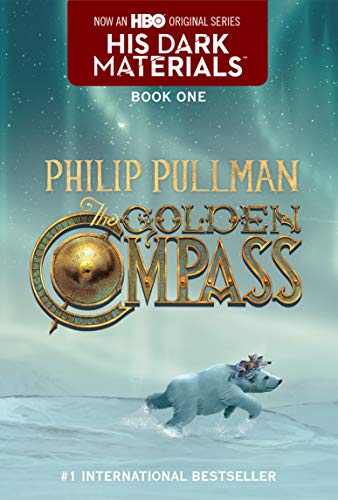 The modern fantasy classic that Entertainment Weekly named an “All-Time Greatest Novel” and Newsweek hailed as a “Top 100 Book of All Time.” Philip Pullman takes readers to a world where humans have animal familiars and where parallel universes are within reach.

Lyra is rushing to the cold, far North, where witch clans and armored bears rule. North, where the Gobblers take the children they steal--including her friend Roger. North, where her fearsome uncle Asriel is trying to build a bridge to a parallel world.

Can one small girl make a difference in such great and terrible endeavors? This is Lyra: a savage, a schemer, a liar, and as fierce and true a champion as Roger or Asriel could want.

But what Lyra doesn't know is that to help one of them will be to betray the other...

A masterwork of storytelling and suspense, Philip Pullman's award-winning The Golden Compass is the first in the His Dark Materials series, which continues with The Subtle Knife and The Amber Spyglass.

"Arguably the best juvenile fantasy novel of the past twenty years." —The Washington Post

"Pullman is quite possibly a genius." —Newsweek

“Extraordinary storytelling at its very best.” —The Detroit Free Press

"Powerful [...] a fantasy adventure that sparkles with childlike wonder." —The Boston Sunday Globe

"Marvelous [...]  the writing is elegant and challenging." —The New Yorker

"Arguably the best juvenile fantasy novel of the past twenty years [...]  If [The Subtle Knife] is as good as The Golden Compass, we'll be two thirds of the way to the completion of a modern fantasy classic."
—The Washington Post Book World

“Pullman is quite possibly a genius...using the lineaments of fantasy to tell the truth about the universal experience of growing up.”  —Newsweek

"Masterful storytelling [...]  with a cast of instantly beguiling characters." —The Dallas Morning News

“The most magnificent fantasy series since Lord of the Rings.”  —The Oregonian

“Pullman has created the last great fantasy masterpiece of the twentieth century.  An astounding achievement.”  —The Cincinnati Enquirer

"Once in a lifetime a children's author emerges who is so extraordinary that the imagination of generations is altered. Lewis Carroll, E. Nesbit, C.S. Lewis, and Tolkien were all of this cast. So, too, is Philip Pullman, whose Dark Materials trilogy will be devoured by anyone between eight and eighty. The most ambitious work since The Lord of the Rings, it is as intellectually thrilling as it is magnificently written." — New Statesman

“[...] a rare few have minds capacious enough to engage in vast cosmos-making, imagining realms and inventing universes. I am thinking of Dante and Milton and Blake. We may now add Philip Pullman.”
—Parents Choice (online)

"The Golden Compass is one of the best fantasy/adventure stories that I have read in years. This is a book no one should miss." —Terry Brooks, author of The Sword of Shannara

"As always, Pullman is a master at combining impeccable characterizations and seamless plotting, maintaining a crackling pace to create scene upon scene of almost unbearable tension.  This glittering gem will leave readers of all ages eagerly awaiting the next installment of Lyra's adventures."
—Publishers Weekly, Starred Review

“This first fantastic installment of the His Dark Materials trilogy propels readers along with horror and high adventure, a shattering tale that begins with a promise and delivers an entire universe.” – Kirkus Reviews, Starred Review

"This first fantastic installment propels readers along with horror and high adventure [...] A shattering tale that begins with a promise and delivers an entire universe." —Kirkus Reviews, Starred

“The characters of Lord Asriel, Mrs. Coutler, and Iorek Byrnison and the cold and beautiful Northern setting are captivating; the constantly twisting plot and escalating suspense are riveting; and Lyra and Pantalaimon are among the gutsiest and wiliest of adventurers. Touching, exciting, and mysterious by turns, this is a splendid work.” —The Horn Book Magazine, Starred

"This is a captivating fantasy, filled with excitement, suspense, and unusual characters." —School Library Journal

“Glorious. . . . The Golden Compass is one of those lyrical suspensions like Alice in Wonderland and The Lord of the Rings that crosses all age lines and intertwines mythologies and legends with seamless beauty.” —BookPage
From the Hardcover edition.

PHILIP PULLMAN is one of the most acclaimed writers working today. He is best known for the His Dark Materials trilogy (The Golden Compass, The Subtle Knife, The Amber Spyglass), which has been named one of the top 100 novels of all time by Newsweek and one of the all-time greatest novels by Entertainment Weekly. He has also won many distinguished prizes, including the Carnegie Medal for The Golden Compass (and the reader-voted "Carnegie of Carnegies" for the best children's book of the past seventy years); the Whitbread (now Costa) Award for The Amber Spyglass; a Booker Prize long-list nomination (The Amber Spyglass); Parents' Choice Gold Awards (The Subtle Knife and The Amber Spyglass); and the Astrid Lindgren Memorial Award, in honor of his body of work. In 2004, he was appointed a Commander of the Order of the British Empire.

It has recently been announced that The Book of Dust, the much anticipated new book from Mr. Pullman, also set in the world of His Dark Materials, will be published as a major work in three parts, with the first part to arrive in October 2017.

Philip Pullman is the author of many other much-lauded novels. Other volumes related to His Dark Materials: Lyra’s Oxford, Once Upon a Time in the North, and The Collectors. For younger readers: I Was a Rat!; Count Karlstein; Two Crafty Criminals; Spring-Heeled Jack, and The Scarecrow and His Servant. For older readers: the Sally Lockhart quartet: The Ruby in the Smoke, The Shadow in the North, The Tiger in the Well, and The Tin Princess; The White Mercedes; and The Broken Bridge.

Philip Pullman lives in Oxford, England. To learn more, please visit philip-pullman.com and hisdarkmaterials.com. Or follow him on Twitter at @PhilipPullman.

The Golden Compass (Paperback or Softback)