Building Red America: The New Conservative Coalition and the Drive for Permanent Power 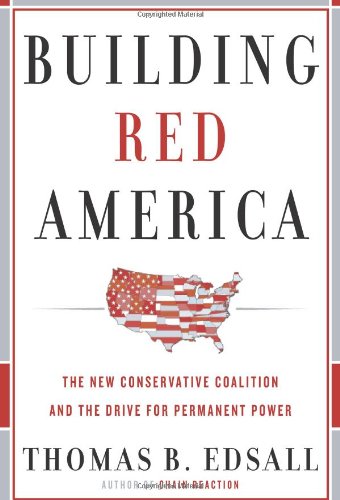 It's no secret that the Republicans are aiming for a generation-long realignment that will establish them as the majority party for the rest of our lifetimes. But few people outside the far right understand what that means. Any realignment has huge effects on political culture, and this one is more ambitious than any other in our history, including the Democratic takeover in the 1930s. It is the first deliberate realignment. It involves cultural changes--in the media and in the academy--that were never part of previous realignments. And it encompasses institutional changes in areas like foreign policy and the judiciary, whose independence was always respected in the past. Every aspect of society and every office of government is being turned to the purpose of strengthening Republican institutions--businesses, evangelical Protestant churches--and weakening Democratic ones, such as unions and consumer groups. Building Red America will bring home to readers for the first time the true extent of the Republican takeover of American politics, by revealing the chief architects of political revolution. The result is a masterful--and disturbing--work of political journalism that challenges all of us to wake up and take heed before the world has changed beyond recognition.

Thomas B. Edsall covered national politics for twenty-five years at the Washington Post. He is now a correspondent for the New Republic and the National Journal. He was a guest columnist in 2006 for the New York Times, and holds the Pulitzer-Moore Chair in Public Affairs Journalism at Columbia University in New York. His previous book, Chain Reaction: The Impact of Race, Rights, and Taxes, was a finalist for the Pulitzer Prize for nonfiction in 1992. He lives in New York and Washington, D.C.

Book by Edsall Thomas B

1. Building Red America: The New Conservative Coalition And The Drive For Permanent Power

2. Building Red America: The New Conservative Coalition and the Drive For Permanent Power

3. Building Red America: The New Conservative Coalition and the Drive for Permanent Power Edsall, Thomas B.