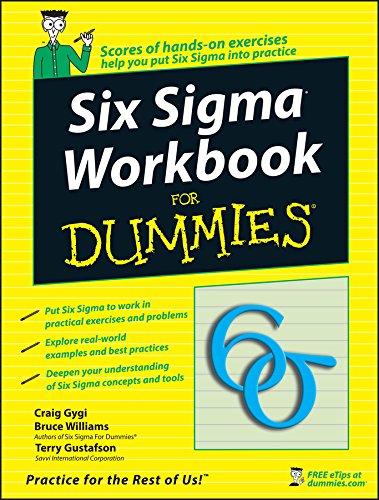 Improve your efficiency -- and bring in big profits!
Need help implementing or understanding Six Sigma? Want to take this powerful problem-solving methodology and apply it to your business? Six Sigma isn't just for Fortune 500 companies anymore; it's for every business, even yours, no matter how big or small. This hands-on workbook provides the knowledge, insight, and practical exercises you need to master Six Sigma and put it to work in your business. Perfect as a companion workbook for Six Sigma For Dummies -- or any other Six Sigma book -- Six Sigma Workbook For Dummies gives you a wealth of examples, problems, and other tools you need to turn Six Sigma theory into practice -- today!

Craig Kent Gygi began studying and applying the elements of Six Sigma well before they were formalized into today’s renowned breakthrough method. As an engineering graduate student at Brigham Young University in the early 1990s, he integrated these then-unorganized improvement techniques into his research and coaching of student product development teams. Upon beginning his career in 1994 at Motorola’s Advanced Manufacturing Research Lab in Florida, he was formally introduced to the just-formalizing Six Sigma method. It resonated deeply with his previous findings. From that time, Craig has applied, taught, and led Six Sigma in all his endeavors, including management and technical capacities at Motorola, Iomega, and General Atomics.
In 1998, Craig founded TolStack, Inc., to develop commercial Six Sigma software tools. He also worked for several years as a technical colleague of Dr. Mikel J. Harry, the original consultant of Six Sigma, co-developing and teaching new advances in its theory and application. In 2002, Craig co-founded Savvi International, into which TolStack merged. Savvi provides solutions for business performance improvement using Six Sigma, Lean, and Business Process Management techniques. Craig acted as the director of Savvi’s products, service, and tools. Today, Craig works with companies in the USA and internationally to integrate Six Sigma practices directly into their core operations.
A Master Black Belt, Craig has wielded Six Sigma techniques now for over 13 years, spanning projects from design to manufacturing to business management. He is also an expert teacher, having instructed and mentored at all levels of Six Sigma, from executives to White Belts.

Bruce David Williams has been fascinated with complex systems since the launch of Sputnik on his third birthday. With undergraduate degrees from the University of Colorado in Physics and Astrophysics, he entered a career in aerospace systems, where he first encountered Six Sigma after Motorola won the inaugural Baldridge Award in 1988. Later, with graduate degrees in technical management and computer science from Johns Hopkins University and Colorado, and as a member of the Hubble Telescope development team, he was intrigued by how breakdowns in the smallest components could lead to colossal system failures. He entered the Six Sigma industry for good in the mid-1990s when he founded a software company to pursue product life-cycle traceability.
Bruce has since been founder and CEO of two Six Sigma research and technology firms, and is now Chairman and CEO of Savvi International, a provider of solutions for business performance improvement using Six Sigma, Lean, and Business Process Management techniques. He resides in the highly-variable environment of the desert foothills of North Scottsdale, Arizona, with his wife, two children, and a normal distribution of dogs, cats, birds, and horses.

Terry James Gustafson comes out of the world of business and finance, and brings a practical and entrepreneurial perspective to Six Sigma. After an undergraduate degree in finance from Baldwin-Wallace, and an MBA degree from Kent State, he began his career in the field of accounting with KPMG Peat Marwick in 1969, and advanced to a Partner position in auditing. After leaving public accounting in 1990, Terry helped found, build, and operate a series of technology-based entrepreneurial ventures, including venture-backed companies as well as a public company.
In 2002, Terry co-founded Savvi International, which provides solutions for business performance improvement using Six Sigma, Lean, and Business Process Management techniques. Terry serves as Savvi’s chief finance and operations officer.
Since founding Savvi, Terry has been immersed in Six Sigma techniques, helping to design and develop Savvi’s training courses in Six Sigma and Lean. In addition, he has extensively taught Six Sigma courses, both in a classroom and as an online i

Descrizione libro Paperback. Condizione: New. 1st. Paperback. Improve your efficiency ? and bring in big profitsNeed help implementing or understanding Six Sigma? Want to take this powerful problem-solving methodology and apply it to your busin.Shipping may be from multiple locations in the US or from the UK, depending on stock availability. 296 pages. 0.621. Codice articolo 9780470045190