Articoli correlati a The Science of Success: How Market-Based Management...

The Science of Success: How Market-Based Management Built the World's Largest Private Company 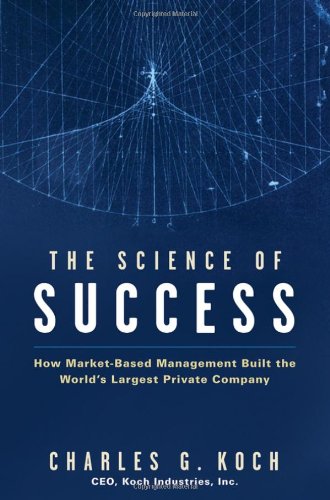 Praise for THE SCIENCE OF SUCCESS

"Evaluating the success of an individual or company is a lot like judging a trapper by his pelts. Charles Koch has a lot of pelts. He has built Koch Industries into the world's largest privately held company, and this book is an insider's guide to how he did it. Koch has studied how markets work for decades, and his commitment to pass that knowledge on will inspire entrepreneurs for generations to come."
—T. Boone Pickens

"A must-read for entrepreneurs and corporate executives that is also applicable to the wider world. MBM is an invaluable tool for engendering excellence for all groups, from families to nonprofit entities. Government leaders could avoid policy failures by heeding the science of human behavior."
—Richard L. Sharp, Chairman, CarMax

"My father, Sam Walton, stressed the importance of fundamental principles—such as humility, integrity, respect, and creating value—that are the foundation for success. No one makes a better case for these principles than Charles Koch."
—Rob Walton, Chairman, Wal-Mart

"What accounts for Koch Industries' spectacular success? Charles Koch calls it Market-Based Management: a vision that nurtures personal qualities of humility and integrity that build trust and the confidence to enhance future success through learning from failure, and a culture of thinking in terms of opportunity cost and comparative advantage for all employees."
—Vernon Smith, 2002 Nobel laureate in economics

"In a very thoughtful, creative, and understandable way, Charles Koch explains how he has used the science of human behavior to create a culture that has produced one of the world's largest and most successful private companies. A must-read for anyone interested in creating value."
—William B. Harrison Jr., Former Chairman and CEO, JPMorgan Chase & Co.

"The same exacting thought, rooted in the realities of human nature, that the framers of the U.S. Constitution put into building a nation of entrepreneurs, Charles Koch has framed to build an enduring company of entrepreneurs—a company larger than Microsoft, Dell, HP, and other giants. Every entrepreneur should study this book."
—Verne Harnish, founder, Young Entrepreneurs' Organization, author of Mastering the Rockefeller Habits, CEO, Gazelles Inc.

Before diving into Charles Koch′s The Science of Success, you must understand two things: Koch is an engineer, born and raised in the Midwest, and he′s an autodidact, with a passion for the free market theories of Austrian economist Ludwig von Mises.
Combine the two and you get a management philosophy book long on hard–edged statements where the author professes an almost Marxist faith in the "fixed laws" that "govern human well–being." His "Market Based Management" (the term is trademarked), is "The Science of Human Action."
Since taking over his father′s refining business in the early 1960s, this M.I.T.–trained engineer has grown Koch Industries more than 2,000–fold, expanding into petrochemicals, fertilizer, trading and, most recently, the $21 billion purchase of Georgia–Pacific. Along the way, Koch notes, there have been huge failures, including a foray into shipping and an attempt to build a cattle–feed–to–steaks agribusiness.
Both fit with Koch′s libertarian philosophy of allowing people to make decisions and reap the rewards or penalties that result. Employees are given "decision rights" according to their demonstrated ability to make choices that result in lower costs or returns that exceed the company′s "opportunity cost," which Koch defines as the returns from investing in the best alternative. "Any employee who is not creating value does not have a real job in the MBM sense of the word," Koch writes, although a worker on the assembly line might consider his weekly paycheck real enough.
Failure isn′t necessarily penalized, unless an employee overlooked some necessary detail or put self–interest ahead of the corporation. "Business failures are inevitable, and any attempt to eliminate them only ensures overall failure," Koch writes.
The grandson of a Dutch immigrant who settled in hardscrabble West Texas, Koch can sound like a Calvinist minister at times. He excoriates as "destructive compensation schemes" such common practices as granting cost–of–living adjustments or automatic raises when employees achieve certain levels of education or seniority. Putting his own spin on Marx, he proposes the maxim "from each according to his ability, to each according to his contribution."
The Science of Success is short on concrete examples, and Koch acknowledges that implementing his Market Based Management can be difficult because of the hazy connection between, say, property rights and the day–to–day decisions of a midlevel manager in charge of a fertilizer plant. The book is especially obtuse when Koch describes his system for grading employees, a four–box "virtue and talents matrix" that balances "values and beliefs" against the skills needed to run the business.
Sprinkled throughout are miniature case studies from Koch′s ascent, however, including his advice to be extremely cautious about entering partnerships and to do so only with an "exit mechanism" in case it doesn′t work out. (The book is dedicated in part to the family of the late J. Howard Marshall, whose own marriage to Anna Nicole Smith spawned a bitter legal battle that will probably continue beyond her recent death).
Performance measures like energy costs should be measured against an ideal, not a budget, he says, and when divisions transfer products among themselves they should be at market prices for the entire amount of goods being "sold," not just a portion. Otherwise one division might wind up subsidizing another, denying Koch the chance to invest the money at a higher return elsewhere.
A graphic example of Koch′s clear–eyed approach to opportunity cost is the Iowa asphalt plant Koch moved when the land under it proved more valuable, on a present–value basis, than the foreseeable earnings from the asphalt production. "There is now an Ameristar Casino and Hotel where the Council Bluffs asphalt plant once stood," Koch writes proudly.
Readers expecting a recipe book for business success will be disappointed, but those of a more philosophical bent will find Koch′s observations fascinating. Not only has he digested the entire Ayn Rand syllabus of free market theory, but he′s had the chance to put it to work from his headquarters on the plains north of Wichita.
It′s hard to argue with the results. The question is whether anybody but Charles Koch could pull off a similar feat. ( Forbes.com, February 26, 2007)

Unlike many management books, which are little more than over–heated and overspun drivel, this one deserves as wide an audience as possible. (The Business, Saturday 9th June 2007)

Unlike many management books, which are little more than over–heated and overspun drivel, this one deserves a wide audience . ( The Business, Saturday 9th June 2007) L'autore:

CHARLES G. KOCH is Chairman of the Board and CEO of Koch Industries, Inc., a position he has held since 1967. Since then, the company has been transformed into a dynamic and diverse group of companies in refining and chemicals, fibers and polymers, commodity and financial trading, and forest and consumer products. Familiar Koch company brands include STAINMASTER carpet, LYCRA spandex, Quilted Northern tissue, and Dixie cups. Koch has continuously supported academic and public policy research (including numerous Nobel Prize winners) for more than 40 years, and has helped build a number of market-based organizations. Koch received a bachelor's degree in general engineering and two master's degrees—in mechanical and chemical engineering—from the Massachusetts Institute of Technology.

2. The Science of Success: How Market-Based Management Built the World's Largest Private Company

3. The Science of Success: How Market-Based Management Built the World's Largest Private Company

4. The Science of Success: How Market-Based Management Built the World's Largest Private Company

Descrizione libro Hardcover. Condizione: New. Condizione sovraccoperta: New. First Edition; Twelfth Printing. Book is brand new and has never been cracked open. Dust jacket is new and protected by a brand new, clear, acid-free mylar cover. We add mylar covers to all books with DJs to preserve the DJs and add luster to magnify their beauty. (If pictured, shown without the mylar cover for an accurate representation of dust jacket. ) ; 8.6 X 5.7 X 1.0 inches; 208 pages. Codice articolo 1965