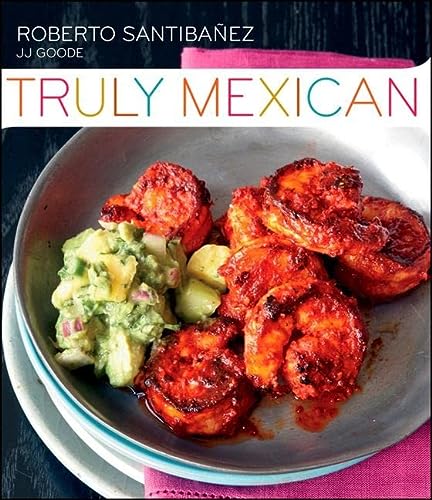 Mexican cuisine is an American favorite from coast to coast, but many people are too intimidated to try cooking real Mexican meals in their own kitchens. In Truly Mexican, Roberto Santibañez shows you that it's the flavors that are complex, not the cooking. With effortless preparations and fresh, flavorful ingredients, Mexican home cooking can be simple and simply delicious.

TRULY MEXICAN by Roberto Santibańez with J. J. Goode and Shelley Wiseman focuses on sauces, with chapters on salsas, guacamoles, adobos and moles. So rather than create composed dishes, you can use his unusual red peanut sauce or deep, rich adobo D. F., made with chiles and Mexican chocolate, to dress rotisserie chicken. Try a few more recipes from Mr. Santibańez Rosa Mexicano s culinary director before he opened Fonda in Brooklyn and anchos, pasillas and guajillos could become regulars in your cupboard. ( New York Times Dining Section , November 2011) Santibańez, a Le Cordon Bleu trained chef and owner of the Brooklyn eatery, Fonda, born and raised in Mexico City, didn t set out to pen a comprehensive guide to Mexican cooking or the rich history of the country s food, but instead focuses solely on sauces from salsas to adobos to moles emphasizing techniques that home cooks can master and use in various dishes. With the goal to convert as many readers as I could from people who would love to cook Mexican food to people who cook Mexican food they love, the author lays a solid foundation with a chapter on ingredients, technique, and equipment. The 140 recipes include a selection of guacamoles including departures from the classic such as a blue cheese guacamole, an apple tequila guacamole, and a seafood guacamole. Recipes for adobos lead readers to main courses featuring various proteins such as adobo braised lamb or a grilled skirt steak marinated in adobo. While one won t find desserts or suggested menus, the author s expertise is conveyed in a straightforward and inspiring tone that will instill confidence in cooks eager to prepare Mexican meals at home, regardless of previous experience or skill level. (Apr.) ( Publishers Weekly , March 2011)shows the true beauty of real Mexican food.(CulinariaLibris.com, August 2011).Wow! Wow! Wow!...Great information. Great photography. Great design and layout. A great addition to your library. (Yum.fi, October 2012) --Various

Roberto Santibañez is a graduate of Le Cordon Bleu in Paris, the chef/owner of Fonda in Brooklyn, New York, and the Culinary Partner of The Taco Truck in Hoboken, NJ. A native of Mexico City, he is the President of Truly Mexican Consulting in New York and a member of The Culinary Institute of America's Latin Cuisines Advisory Council. He is also the author of Rosa's New Mexican Table.

JJ Goode is a Brooklyn-based food writer who has written about food and travel for the New York Times, Gourmet, Saveur, Bon Appetit, Food & Wine, and Every Day with Rachael Ray. He is a contributing editor for Details, and the coauthor of Morimoto: The New Art of Japanese Cooking by Masaharu Morimoto and Serious Barbecue by Adam Perry Lang.

Romulo Yanes is a New York-based photographer who specializes in editoril, food, and travel. He was the photographic eye for Gourmet for nearly 25 years, capturing memorable images for the magazine's covers and travel and food segments.