Articoli correlati a Don't Count On It!: Reflections on Investment Illusions,... 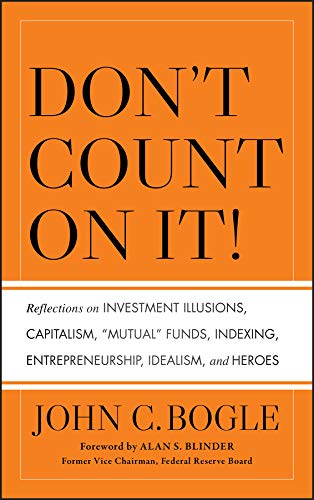 This collection of essays based on speeches given by the founder of the Vanguard mutual fund group and creator of the first index mutual fund provides insights into investing and entrepreneurship and gives advice to America’s future leaders.

Don t Count on It! is a wise book. As most traders and investors remain convinced that they can beat the market, it s always sobering to hear a compelling voice from the other side. (Seeking Alpha)

"If Bogle writes it, it s worth reading. His latest, Don t Count On It, is a collection of 35 essays, every one of them filled with wisdom and insight. . . While I have read Bogle s views on these issues many times, I m always impressed with the quality of his writing (Where else can you read quotations from Adam Smith to Winston Churchill to Cato?), the wit and humility he shows and his passion to help investors. The book is a compelling read, one that in effect tells the story and mission of a great man. We re lucky and privileged to have him fighting on our side.  As Bogle noted in his book, Machiavelli described the accumulation of worldly glory as the motivating principle that drives leaders to undertake great enterprises and do great things on behalf of their fellow citizens and not just themselves. Hard to find a better description of Bogle himself." (MarketWatch)

Mr Bogle s prescription for a better system is relatively simple: to demand proper fiduciary management from money managers. They must prioritise client interests, act as responsible corporate citizens, charge reasonable fees and eliminate conflicts of interest. Amen to that. It may sound like nostalgia from an old–timer, or idealism from a visionary. But without such changes, investors and society will continue to be short–changed as the financial community carries on regardless. (Financial Times)

In Don t Count on It! Reflections on Investment Illusions, Capitalism, Mutual Funds, Indexing, Entrepreneurship, Idealism, and Heroes, Bogle hammers at what he labels the cost matters hypothesis: Whether markets are efficient or inefficient, investors as a group must fall short of the market return by precisely the amount of the aggregate costs they incur. It is the central fact of investing. Not surprisingly, the book deals extensively with the low–cost innovation for which Vanguard is best known: the stock index mutual fund. When the company first made indexing available to small investors in 1975, critics derided the notion as Bogle s folly. To Bogle, however, the benefits to investors were irrefutable. . .  The impact of indexing has been so great that a second, hugely important contribution by Vanguard has been overshadowed. Vanguard originated the now standard segmentation of bond funds into short–, intermediate–, and long–term varieties. Bogle was enshrined in the Fixed Income Analysts Society Hall of Fame for this innovation. The author of Don t Count on It! does not dwell on such honors, which include being named one of the world s 100 most powerful and influential people by Time magazine. In fact, Bogle devotes the final section of his book to tributes to four of his own heroes: Walter Morgan, economist Paul Samuelson, investment guru Peter Bernstein, and Dr. Bernard Lown, a Nobel laureate whom he credits with keeping him alive in defiance of a mystifying heart ailment. Bogle also shows modesty in sharing credit for his contributions to the field and in downplaying his own theoretical expertise. His unashamed display of such old–fashioned virtues, as well as his heretical view that running a business is not entirely about maximizing the wealth of the owners, has earned him the nickname St. Jack. (Financial Analysts Journal)

Descrizione libro John Wiley & Sons Inc, United States, 2010. Hardback. Condizione: New. 1. Auflage. Language: English. Brand new Book. Praise for Don't Count On It! "This collection of Jack Bogle's writings couldn't be more timely. The clarity of his thinking and his insistence on the relevance of ethical standards are totally relevant as we strive to rebuild a broken financial system. For too many years, his strong voice has been lost amid the cacophony of competing self-interests, misdirected complexity, and unbounded greed. Read, learn, and support Jack's mission to reform the industry that has been his life's work." PAUL VOLCKER, Chairman of the President's Economic Recovery Advisory Board and former Chairman of the Federal Reserve (1979 1987) "Jack Bogle has given investors throughout the world more wisdom and plain financial 'horse sense' than any person in the history of markets. This compendium of his best writings, particularly his post-crisis guidance, is absolutely essential reading for investors and those who care about the future of our society." ARTHUR LEVITT, former Chairman, U.S. Securities and Exchange Commission "Jack Bogle is one of the most lucid men in finance." NASSIM N.TALEB, PhD, author of The Black Swan "Jack Bogle is one of the financial wise men whose experience spans the post World War II years. This book, encompassing his insights on financial behavior, pitfalls, and remedies, with a special focus on mutual funds, is an essential read. We can only benefit from his observations." HENRY KAUFMAN, President, Henry Kaufman & Company, Inc. "It was not an easy sell. The joke at first was that only finance professors invested in Vanguard's original index fund. But what a triumph it has been. And what a focused and passionate drive it took: it is a zero-sum game and only costs are certain. Thank you, Jack." JEREMY GRANTHAM, Cofounder and Chairman, GMO "On finance, Jack Bogle thinks unconventionally. So, this sound rebel turns out to be right most of the time. Meanwhile, many of us sometimes engage in self-deception. So, this book will set us straight. And in the last few pages, Jack writes, and I agree, that Peter Bernstein was a giant. So is Jack Bogle."JEAN-MARIE EVEILLARD, Senior Adviser, First Eagle Investment Management Insights into investing and leadership from the founder of The Vanguard Group Throughout his legendary career, John Bogle-founder of the Vanguard mutual fund group and creator of the first index mutual fund-has helped investors build wealth the right way, while, at the same time, leading a tireless campaign to restore common sense to the investment world. A collection of essays based on speeches delivered to professional groups and college students in recent years, in Don't Count on It is organized around eight themes * Illusion versus reality in investing * Indexing to market returns * Failures of capitalism * The flawed structure of the mutual fund industry * The spirit of entrepreneurship * What is enough in business, and in life * Advice to America's future leaders * The unforgettable characters who have shaped his career Widely acclaimed for his role as the conscience of the mutual fund industry and a relentless advocate for individual investors, in Don't Count on It, Bogle continues to inspire, while pushing the mutual fund industry to measure up to their promise. Codice articolo BTA9780470643969

8. DON'T COUNT ON IT!: REFLECTIONS