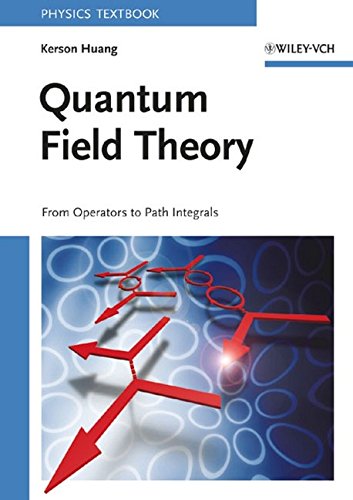 A unique approach to quantum field theory, with emphasis on the principles of renormalization Quantum field theory is frequently approached from the perspective of particle physics. This book adopts a more general point of view and includes applications of condensed matter physics. Written by a highly respected writer and researcher, it first develops traditional concepts, including Feynman graphs, before moving on to key topics such as functional integrals, statistical mechanics, and Wilson's renormalization group. The connection between the latter and conventional perturbative renormalization is explained.

Quantum Field Theory is an exceptional textbook for graduate students familiar with advanced quantum mechanics as well as physicists with an interest in theoretical physics. It features:
* Coverage of quantum electrodynamics with practical calculations and a discussion of perturbative renormalization
* A discussion of the Feynman path integrals and a host of current subjects, including the physical approach to renormalization, spontaneous symmetry breaking and superfluidity, and topological excitations
* Nineteen self-contained chapters with exercises, supplemented with graphs and charts

KERSON HUANG, PhD, a leading authority on quantum physics, is Professor of Physics at Massachusetts Institute of Technology. He is the author of Statistical Mechanics, also published by Wiley, and Quarks, Leptons and Gauge Fields, Second Edition.

Descrizione libro Condizione: New. Brand New Original US Edition.We Ship to PO BOX Address also. EXPEDITED shipping option also available for faster delivery.This item may ship from the US or other locations in India depending on your location and availability. Codice articolo ABBNN-129834