Articoli correlati a Overdrive: Bill Gates and the Race to Control Cyberspace

Overdrive: Bill Gates and the Race to Control Cyberspace 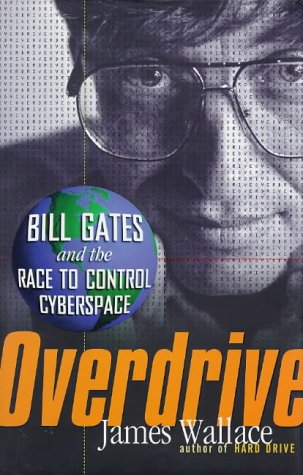 Traces the career of the chairman of Microsoft from 1992 to 1997, focusing on his all-out effort to catch up to and overtake the Netscape company in order to dominate the Internet. 75,000 first printing. $125,000 ad/promo. Tour.

James Wallace is a senior reporter for the Seattle Post–Intelligencer and recipient of the 1990 National Headliner Award for Public Service. He is the author of Hard Drive: Bill Gates and the Making of the Microsoft Empire, also published by Wiley.

He′s the wealthiest man in the world, happily married, the father of a young child. As Chairman and CEO of Microsoft, the juggernaut of the software industry, he dominates the corporate landscape like a colossus. His reputation for ruthlessly eliminating any and every obstacle in his path has been earned battle by battle, victory by victory, and, as the twenty–first century beckons, onetime wunderkind Bill Gates faces the future with fire, fierce determination ––and fear.

What could Bill Gates possibly have to fear? Fallibility. The renowned visionary missed the turnoff to the information superhighway ––and let a gang of young upstarts at Netscape seize the biggest opportunity to hit the computing industry since the PC: the advent of the Internet. Suddenly, the mighty Microsoft empire seemed vulnerable, and Gates found himself in the unfamiliar ––and uncomfortable ––position of having to play catch–up. Launching one of the most dramatic corporate retoolings in history, Bill Gates shifted into overdrive.

In this hard–hitting, controversial, and compelling account, acclaimed journalist James Wallace tells the inside story of Gates′s no–holds–barred struggle to keep Microsoft on top. Picking up where his bestselling Hard Drive left off, Wallace goes behind the scenes of Gates′s ongoing battles with Novell, Borland, Lotus, and other competitors. He sheds new light on the Justice Department′s antitrust investigation of Microsoft, from the reasons behind the transfer of the case from the FCC to Justice, to the astounding moment when, in the face of Gates′s ferocious resistance, Justice blinked. Here, too, is the story behind the mega–marketing blitz that led to the most eagerly anticipated event in the history of the software industry: the spectacular launch of Windows 95(r). Moving from the boardrooms of IBM and Time Warner to the cramped research and development labs of Microsoft, this is a fascinating chronicle of high–stakes corporate maneuvering ––part chess game, part cloak–and–dagger intrigue.

Based on candid interviews with friends, colleagues, and competitors, as well as both current and former Microsoft employees, Overdrive also offers penetrating insight into Bill Gates the man vs. the media myth. No longer the geeky boy wonder, the industry titan is, at forty, a world citizen who plays golf with the president and bridge with fellow billionaire Warren Buffett, and who hobnobs with the Hollywood elite. But does he still have what it takes to flatten the competition? Find out as one of the world′s most powerful and enigmatic personalities confronts the greatest challenge of his career.

"A stupendous success story. This is the most informative book yet on Bill Gates and Microsoft." ––The Washington Post.

"A disquieting but captivating portrait of a complex personality. Hard Drive spins a fascinating yarn of the extremes of fascination and hatred that such singlemindedness can inspire." ––San Francisco Chronicle.

"A fascinating tale . . . If you are interested in computers, you′ll find this eye–opening. If you′re interested in money, here′s a case study in how to make it. If people are what fascinate you, finding out what makes Gates swing will keep you absorbed." ––The New York Post.

"Remarkable . . . This book will make you wonder why you didn′t buy Microsoft stock when it went public." ––The Wall Street Journal.

"An engaging, almost classic tale of a boy who finds power in gadgets and then won′t let go." ––Los Angeles Times.

"An exciting tale told in a racy style, with plenty of detail and well researched quotations, all focused on the enigmatic personality of Bill Gates." ––London Financial Times.

1. Overdrive: Bill Gates and the Race to Control Cyberspace

2. Overdrive: Bill Gates and the Race to Control Cyberspace