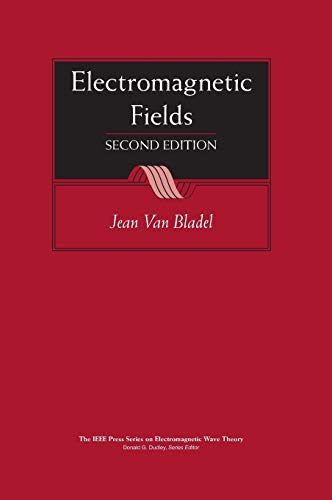 Professor Jean Van Bladel, an eminent researcher and educator in fundamental electromagnetic theory and its application in electrical engineering, has updated and expanded his definitive text and reference on electromagnetic fields to twice its original content. This new edition incorporates the latest methods, theory, formulations, and applications that relate to today's technologies. With an emphasis on basic principles and a focus on electromagnetic formulation and analysis, Electromagnetic Fields, Second Edition includes detailed discussions of electrostatic fields, potential theory, propagation in waveguides and unbounded space, scattering by obstacles, penetration through apertures, and field behavior at high and low frequencies.

The book appears to be very well written, and is excellently edited and produced.  There is no doubt that it will be received as well as its previous edition has been. ( Computing Reviews, July 1, 1008)

Professor Jean Van Bladel is an eminent researcher and educator in fundamental electromagnetic theory and its application in electrical engineering. Over a distinguished career, he has been the recipient of many awards and honors. A Fellow of the IEEE, he was awarded the Henrich Hertz Medal of the IEEE in 1995 and the Distinguished Achievement Award of the IEEE Antennas and Propagation Society in 1997. With the International Union of Radio Science (URSI), he was secretary general from 1979 to 1993 and was named Honorary President in 1999. He is currently Professor Emeritus at Ghent University in Belgium.