Articoli correlati a Concepts and Applications of Finite Element Analysis 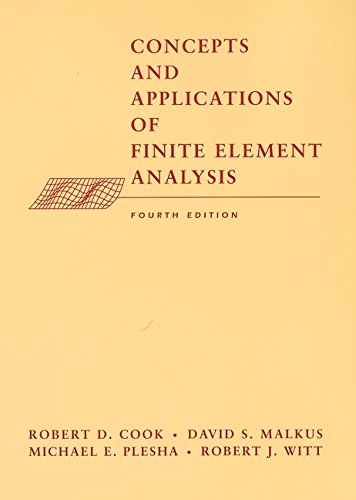 This book has been thoroughly revised and updated to reflect developments since the third edition, with an emphasis on structural mechanics. Coverage is up-to-date without making the treatment highly specialized and mathematically difficult. Basic theory is clearly explained to the reader, while advanced techniques are left to thousands of references available, which are cited in the text.

Robert D. Cooke received his Ph.D. in Theoretical and Applied Mechancis from the University of Illinois in 1963. Since then he has been at the University of Wisconsin-Madison, where he is now a professor in the Department of Engineering Physics. His interests include stress analysis and finite element methods. In addition to the present book, he is author of Finite Element Modeling for Stress Analysis (Wiley, 1995) and Advanced Mechanics of Materials (2nd Edtion, Prentice Hall, 1999, with Warren C. Young).

David S. Malkus received his Ph.D. from Boston University in 1976. He spent two years at the National Bureau of Standards and seven years in the Mathematics Department of Illinois Institute of Technology. He is now Professor of Engineering Mechanics at the Univrersity of Wisconsin-Madison. His research interests concern application of the finite element method to problems of structural and continuum mechanics, in particular the flow of non-Newtonian fluids. He is a member of the Rheology Research Center (University of Wisconsin-Madison) and the Society of Rheology.

Michael E. Plesha received his B.S. from the University of Illinois at Chicago, and his M.S. and Ph.D. degrees from Northwestern University, the Ph.D. degree in 1983. He has been a faculty member in the Department of Engineering Physics at the University of Wisconsin-Madison since 1983 where he is Professor of Engineering Mechanics. His research areas include constitutive modeling and finite element analysis of contact-friction problems, transient finite element analysis, and discrete element methods.

Robert J. Witt received his Ph.D. in Nuclear Engineering from the Massachusetts Institute of Technology in 1987. He is now an associate professor in the Department of Engineering Physics at the University of Wisconsin-Madison. His research interests are in computational methods of fluid and solid mechanics, with particular application to nuclear systems.

LEARN FINITE ELEMENT THEORY AND HOW TO APPLY IT

This book is an accessible introduction to finite element analysis.
The exposition moves gradually from simplke concepts to more advanced theory, with the goal of making competent applications based on sold understanding. In addition to theory, considerable attention is given to practical matters: modeling for finite element analysis, checking computed results for errors, and revising an analysis as needed.

Any finite element analysis software can be used with this book.
However, VisualFEA (ISBN 0471-21207-5) developed by Intuitive Software, Inc. is available from Wiley for packaging with this book.
VisualFEA is exceptionally easy-to-use and powerful finite element analysis software with computer-based training tools for teaching and learning the finite element method. For both Windows and Mac operating systems. (For those seeking more emphasis on implementation, Fortran coding is available as described in the Preface.)

4. CONCEPTS AND APPLICATIONS OF FIN