Articoli correlati a Quantum Mechanics Simulations: The Consortium for Upper-Leve... 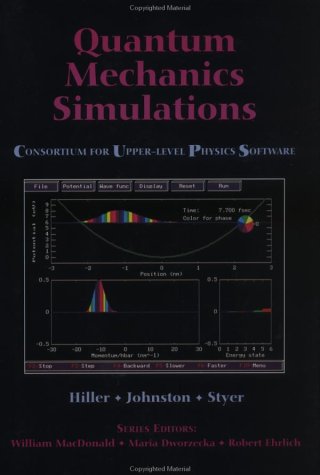 The Consortium for Upper Level Physics Software (CUPS) has developed a comprehensive series of Nine Book/Software packages that Wiley will publish in FY '95 and '96. CUPS is an international group of 27 physicists, all with extensive backgrounds in the research, teaching, and development of instructional software. The project is being supported by the National Science Foundation (PHY-9014548), and it has received other support from the IBM Corp., Apple Computer Corp., and George Mason University. The Simulations being developed are: Astrophysics, Classical Mechanics, Electricity & Magnetism, Modern Physics, Nuclear and Particle Physics, Quantum Mechanics, Solid State, Thermal and Statistical, and Waves and Optics.

Other CUPS Projects Astrophysics Simulations Classical Mechanics Simulations Electricity and Magnetism Simulations Modern Physics Simulations Nuclear and Particle Physics Simulations Solid State Physics Simulations Thermal and Statistical Physics Simulations Waves and Optics Simulations Quantum Mechanics Simulations is one volume in a series of nine book/software packages developed by the Consortium for Upper-Level Physics Software. CUPS is an international group of 27 physicists, all with extensive backgrounds in the research, teaching, and development of instructional software. The simulations included in this volume cover: Bound State Wave Function?s in One and Three Dimensions, Stationary Scattering States in One and Three Dimensions, Electron States in a Lattice, Time Development, Identical Particles, and Bound States in Cylindrically Symmetric Potentials. These simulations include complex, often realistic, calculations of models of various physical systems. If desired, the user may also vary many parameters of the system, and interact with it in other ways, so as to study its behavior in real time. Source code has been provided for users who wish to modify programs. All of the programs are written in Borland/Turbo Pascal for MS-DOS. Minimum hardware requirement is an IBM-compatible 386-level machine with mouse and VGA color monitor. The disk(s) included in this package are 3.5???.