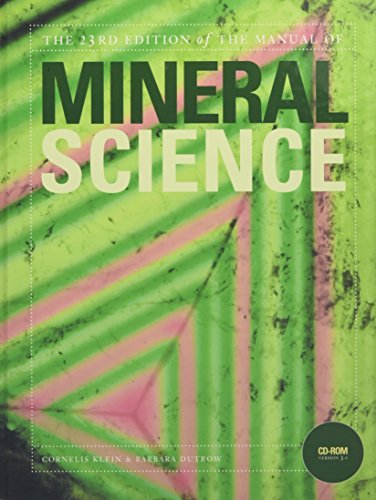 The classic in the field since 1848, this extraordinary reference offers readers unsurpassed coverage of mineralogy and crystallography. The book is known for integrating complete coverage of concepts and principles with a more systematic and descriptive treatment of mineralogy. The revised edition now includes a CD-ROM to let readers see the minerals and crystals, while also viewing chemical composition, symmetry, and morphological crystallography.

Dr. Cornelius Klein is the noted academic mineralogist who co-authored, and later took on the monumental task of updating, Dana's original Manual of Mineralogy.

James D. Dana (1813 - 1895) graduated from Yale University in 1833. He joined a U.S. exploring expedition to the South Seas (1838 - 42), acting as a geologist and zoologist. His contributions to the American Journal of Science stimulated U.S. geologic inquiry. His research into the formation of the Earth's continents and oceans led him to believe in the progressive evolution of the Earth's physical features over time. By the end of his life he also came to accept the evolution of living things, as articulated by Charles Darwin. During his lifetime, and largely under his leadership, U.S. geology grew from a collection and classification of unrelated facts into a mature science.

Descrizione libro Softcover. Condizione: New. Brand new book. This is an international edition textbook with identical content as the US version and is usually paperback bound instead of hardcover. We ship all our orders from CA/IL, USA (depending on your address) and NOT from Asia! Buy with confidence from a 5-star US based seller. Choose expedited shipping for superfast delivery with tracking. Codice articolo 1305|9780471721574

The Manual of Mineral Science, 23/E, With CD-Rom

Descrizione libro Condizione: New. Brand New Paperback International Edition.We Ship to PO BOX Address also. EXPEDITED shipping option also available for faster delivery.This item may ship from the US or other locations in India depending on your location and availability. Codice articolo ABBUS-13797

Descrizione libro Condizione: New. Brand New Paperback International Edition.We Ship to PO BOX Address also. EXPEDITED shipping option also available for faster delivery.This item may ship from the US or other locations in India depending on your location and availability. Codice articolo ABBUS-67472

Descrizione libro soft cover. Condizione: New. International Edition. No supplemental materials. International Editions may have a different cover or ISBN but generally have the exact same content as the US edition, just at a more affordable price. In some cases, end of chapter questions may vary slightly from the US edition. International Editions are typically printed in grayscale, and likely will not have any color throughout the book. New. Books ship from multiple locations depending on availability. All orders are shipped with tracking information. We take pride in our customer service. Please contact us if you have any questions regarding this listing. Codice articolo 13755